*Editor's note:
Now, I know leaving things with the format intact is part of the delicious flavor given in a letter, but somehow, I can’t do that to ya’ll. To read one solid unformatted long letter is just to painful to my eyes. I cheated. I formatted this letter for Dallin. Hah!
--------------------------
I done got through another week! A note about this email. The internet wouldn't load the regular browser, so I had to start this in HTML mode, which means that apparently I can't use the enter key. One gigantic paragraph? Let's get started.
Things are starting to stabilize here at the MTC as we get into a routine. The cook told us yesterday that the mystery meat that sometimes comes with lunch has been dog twice. I guess that makes three of us Johnson kids who work with dogs, eh, Holly at the Humane Society and Maren at the Puppy Steps training center? :)
Time is moving more quickly and the constant studying is finally starting to pay off. The Spanish was intimidating at first. By the end of the first day, they had us praying in Spanish. By the end of the second day, we were bearing our testimonies. The evening of the third day, we taught a lesson. In Spanish. Although admittedly, "lesson" is a generous term. So is "Spanish." By now, I can have half-decent conversations with people and talking out loud actually adds to lessons instead of starting and subsequently destroying them with a broken Spanglish hammer. Yay! 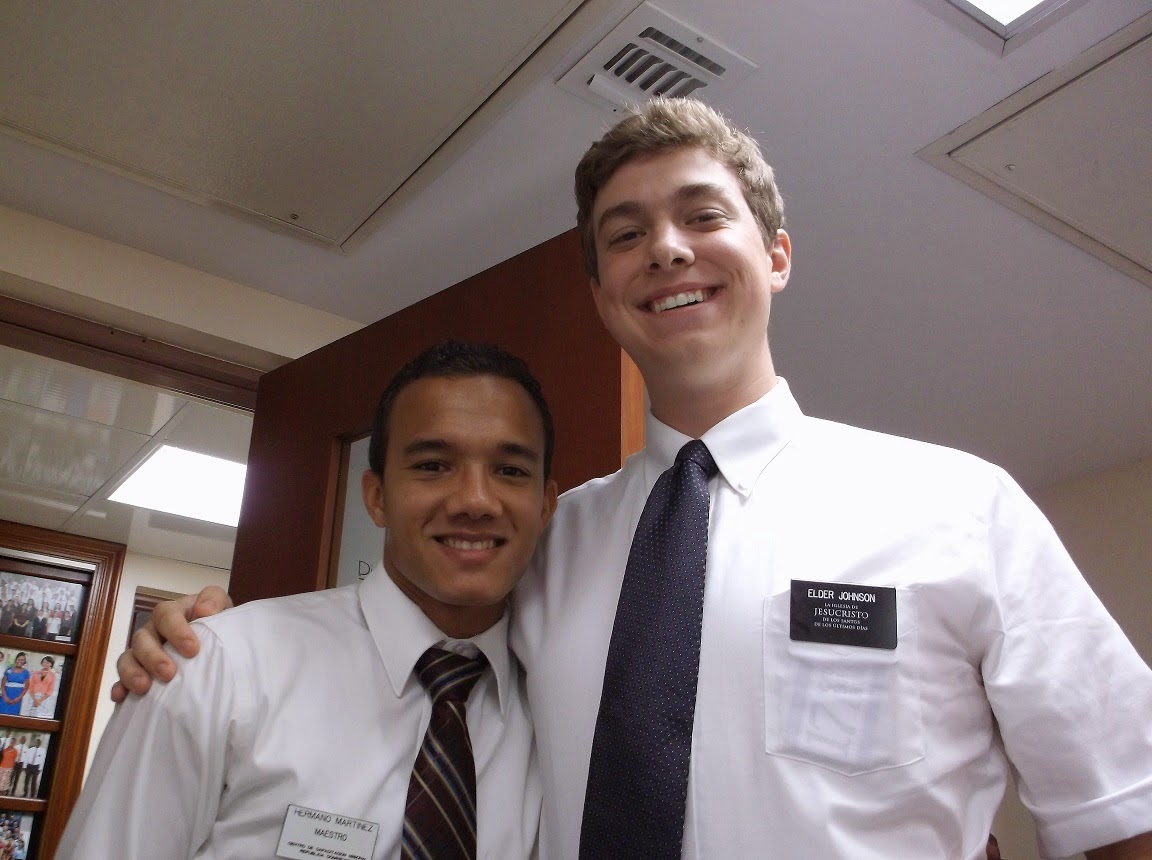 The MTC and temple are surrounded by walls with a gate, and there's even barbed wire on top of the wall by our outdoor study area. Our eating is regulated and we get one hour of exercise time per day. Jail jokes abound. My district made up a fake escape plan to tie up and sedate our teacher, blow the wall, and hang-glide back to the states off the top of a nearby 25-story apartment building. We deliberately left it on the board for our teacher to find. I was in the bathroom when he found it, but I heard the laughing down the hall and through two doors. Martinez, our teacher, has mastered physical humor and never fails to crack me up. I'm attaching a picture of the two of us.
The teachers here are all slightly insane. Another one of them, Nuñez, is an avid anime watcher and mad frisbee player. Yesterday during gym time, we were playing ultimate frisbee and we started to lose. To be clear, missionaries don't keep score, we just have fun. But the other team started having a lot more fun than us. Nuñez cried, "TIME TO OPEN THE FIRST GATE!!" and started making waterbending motions. When we kept having less fun, he opened the second gate and donned a Naruto headband. Our struggles continued, and before long, he had disappeared. I then spotted him crouching in a corner of the parking lot, gouging a transmutation circle into the pavement with a rock. "THIRD GATE ACTIVATE!!!!!!!!!!!!!!!!" We finally cleaned up our act. Afterward, he said, "That was the closest to opening the fourth gate I've come in a long time. I've only done it once before, and I almost died." Crazy man.
This last Tuesday, we left the compound for the first time since we arrived and went to a store about four blocks from the MTC. You don't know you're in a different country like you do when you're in a store. Everything from the products, the signs, the advertisements, the shoppers, the carts, and everything in between is different. The conversion rate is about forty pesos to the dollar. Some missionaries didn't realize this and one ended up spending almost one hundred and fifty dollars on food and ties. We also had an uncomfortable moment when I asked a worker where I could find "cerveza." On Sunday nights, we have ice cream, and I was looking for cherries. The word for cherry is "cereza." My district leader found me browsing in the liquor aisle. Turns out that cerveza means beer. Oops.
Another thing about the Dominican Republic is that they don't celebrate Thanksgiving or Halloween, which means that they celebrate Christmas from October until January. Already I can hear the pained cries of Maren's soul from across the Atlantic. There's a park right outside the compound, and city workers have been winding Christmas lights around palm trees all week. It's a good thing I love me some Christmas. 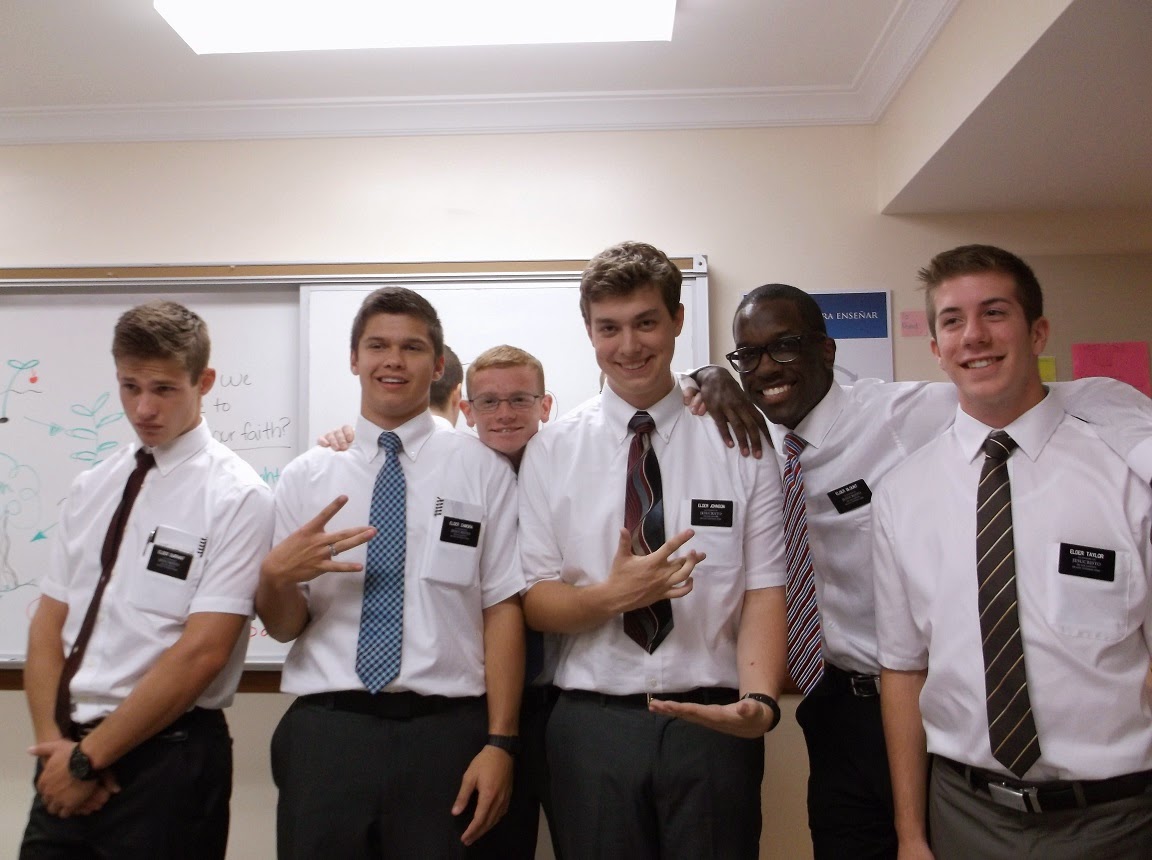 I've decided that someone should do a documentary about my district. Anyone who knows me will know that I love to laugh, but I rarely laugh particularly hard. With my district, I laugh until I cry every single day. Good souls with excellent senses of humor.

Also, whenever things get really ridiculous, hearing Elder Blount shake his head and in his southern accent say, "Y'all need Jesus," gets me every time. A picture of him and myself is attached. At the same time, every single missionary there is capable of toning it down and being incredibly spiritual. I'm attaching a third picture. The people in it are all of the elders in my district. Why not with the hermanas? Well, simply because I don't yet have such a picture. One will be forthcoming! After I've learned how to do a decent smile in photos. 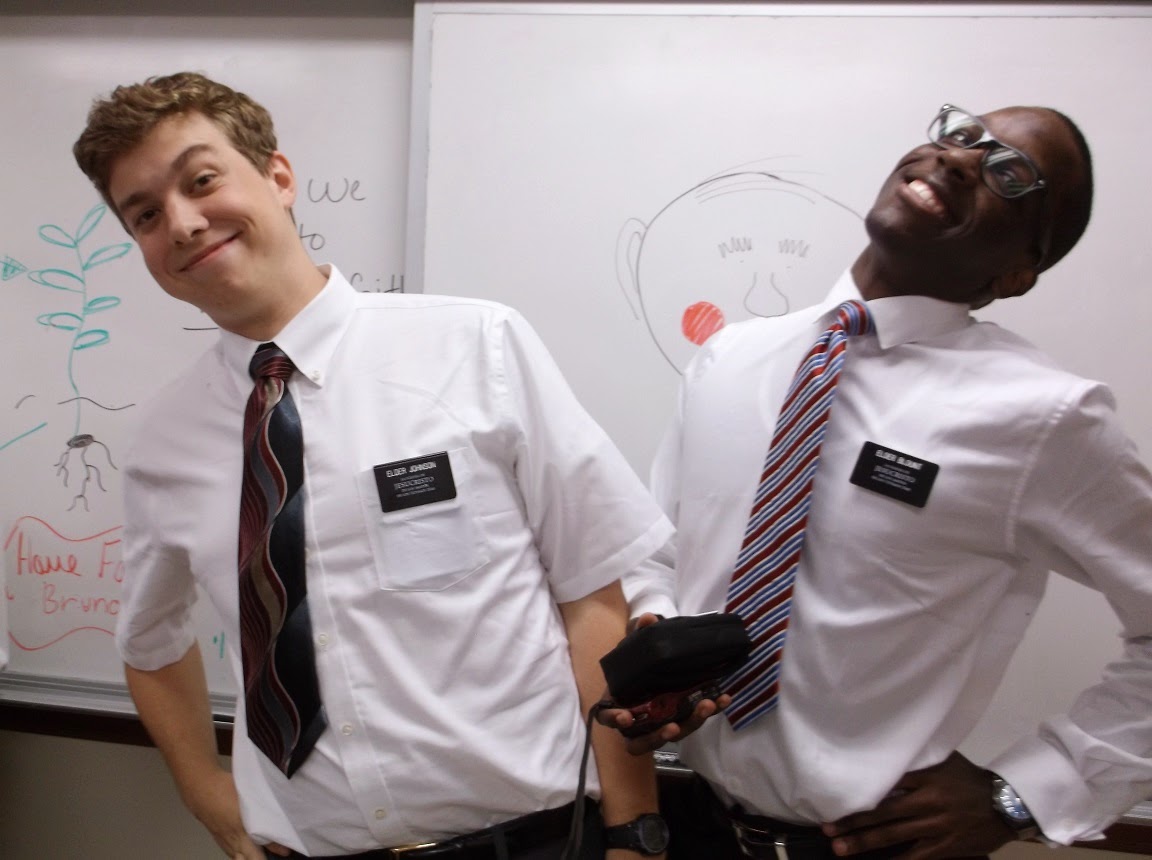 So it's on to another week in the Dominican Republic for me. For all you folks back in the states, may the sun shine, the snow fall, and the women you all are allowed to so much as brush past without feeling guilty be beautiful daughters of God. The church is true! Love you all.
Dallin 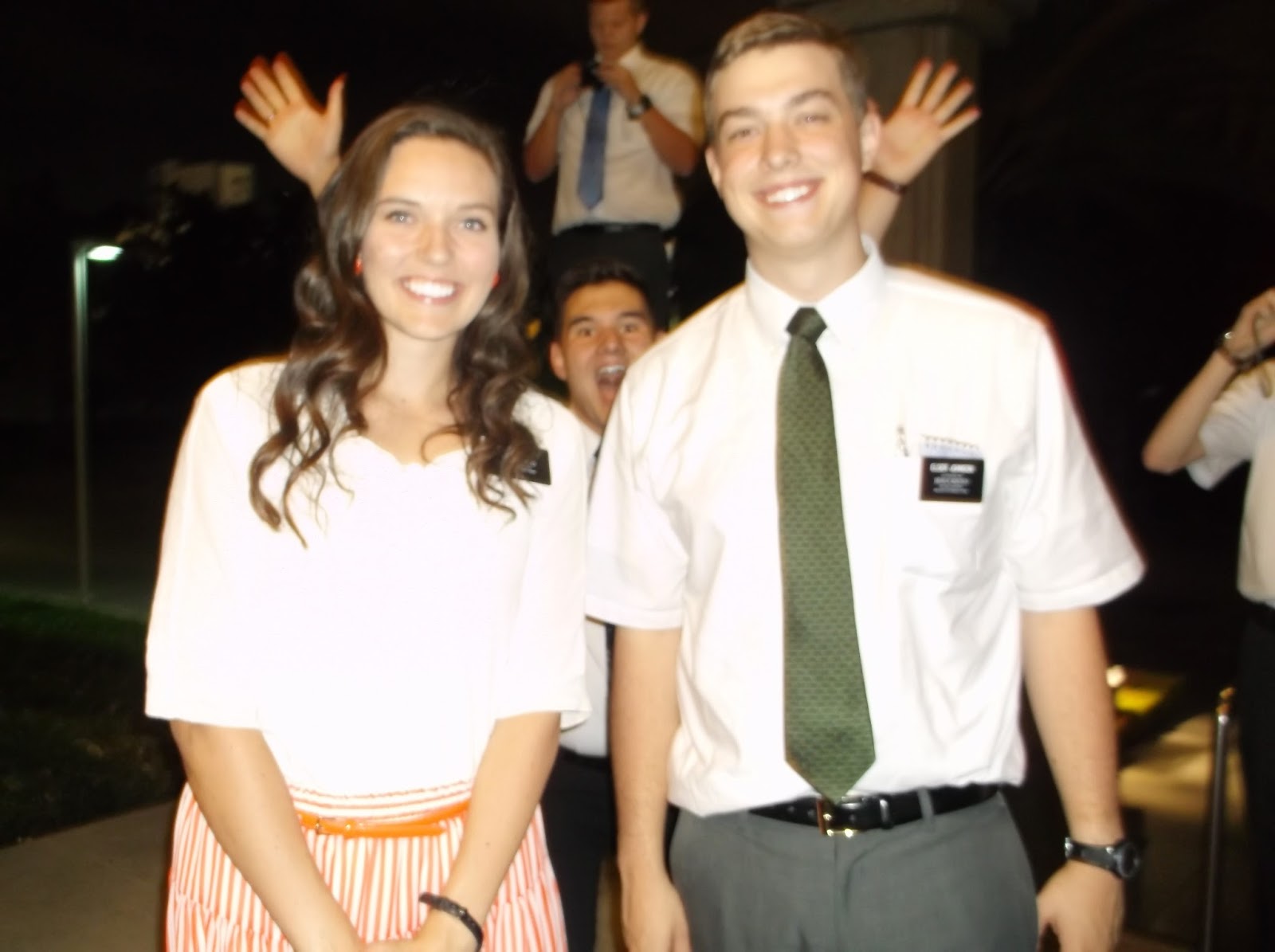 Posted by SunnyNell at 7:55 PM