Right, so on to the week.

My new companion is Elder Orchard. He's an ancient missionary from Las Vegas. He's going to finish his mission this transfer. He's 5' 5" and I would conservatively estimate that he benches twice as much as I do. And I'm like. Ten inches taller. So. That's embarrassing. Also, we totally go to the gym in the mornings.

Being a zone leader is one heck of a job. I went up to this place called Sabana Grande de Boyá to do some baptismal interviews. Sabana Grande de Boyá is like Consuelo. It was wonderful. It smelled like cow dung and I felt right at home. I wish I knew how to type a hashtag so that I could hashtag:cachevalleylandof72000cows. Do people still hashtag? I dunno. But the interviews were fairly uneventful. We were told that the guy who was supposed to be interviewed was somewhere on a sugar cane plantation looking for lost sheep (kind of ironic, huh?) and so we didn't even end up getting to do the interview. hastag:campoproblems. BUT! I did get to write in my journal for the first time since transfers. Oh my unborn posterity is going to kill me.


But it comes with perks! I got to do an intercambio with a trainee named Elder Rosales who's from Honduras and is serving in.... Los. Solares. Yeah. My old stomping grounds. And I discovered something very important. I really love Los Solares. It's not just the bomb-diggety chicken empanadas from a licensed D'Maykel franchise. Nor is it the friendly colmado owner, Freddie, who always told me that everything only costed ten pesos when it did not in fact cost ten pesos. Freddie helps though. No, as I walked down that street in Los Solares, it just felt like home.

Which is an extremely weird thought, because Los Solares is nothing like home. But it felt that way. It's also interesting because, well, it's been nearly a year since I was last there. Everything was so familiar. But also totally different. Some roads that were dirt are now paved. Juice costs like 80 pesos (!!!) New houses were built. There were different people behind the counter at the cafeteria and internet center by the house. It was the same. But different.

I think going home will be kind of like that. I don't mean to talk about going home, but as of this Wednesday, I have exactly three months remaining. That's like. A little over one scout camp season. That's really not long at all. This feeling of being an old man in the mission is odd. Becoming a better missionary has become the object of my existence for the last twenty months, and I'm still doing it, but I'm doing it with the knowledge that in a lot of cases, I'm preparing things here for someone else. The whippersnappers. The greenhorns. The younguns.

And that's okay. It's an important job and someone's gotta do it. Just feels weird is all.

But hey! Love you all and hope you have a great week!

P.S. Sorry for the lack of pictures. I still haven't found my camera cord since being transferred.
Posted by SunnyNell at 10:19 AM No comments:


This week's epistle will be very short. Apart from finding the world's largest mojito, apparently, I have been transferred. I am going to return to the zone Hainamosa, only this time, I'm going to be in the area Hainamosa. For any of y'all who done forgot, I was in the area Los Solares in that zone from February until July last year. I will be a zone leader there.


Ah! But leaving Verón. I don't really know what to say that I didn't say the last time. Leaving is still hard. I love so many people here. 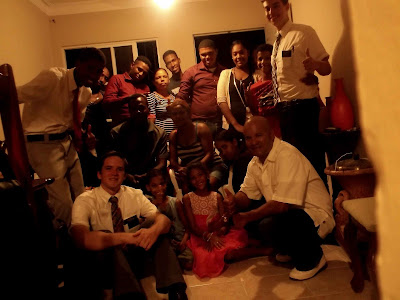 But! I did want to send that group picture there that was taken yesterday (Sunday). This is a diverse roomful. Without pointing out faces or naming names, in this picture there are orphans, divorcees, widows, widowers, a homosexual, one who had committed murder, and two Mormon missionaries. These people represent broken families and regrettable decisions. They've all made some mistakes, some of them terrible, terrible mistakes.

And all of them are being healed. Because all these people were gathered in one home in the name of Jesus Christ. It seems so ridiculous. But that's just the miraculosity of missionary work.

Also, my mother is legit.

Love,
Dallin
Posted by SunnyNell at 11:27 AM No comments:

Just a quick note to tell you that I spent about an hour and half among your missionary sons this morning in Dominican Republic.  My wife and I are here vacationing and met your sons in Church this morning.  They seemed to be very good young men and a great support for the branch in Pueblo Bavaro.  They greeted us warmly as we approached the church and I was happy to see them interacting with the ward members.

Elder Johnson played the keyboard for Sacrament meeting and did a great job.  That's a great talent which is now paying off from all the practice.  It made me think of my own 15 year old son, who has been has been taking piano lessons from his mom for many years.  I hope that he will have the same opportunities to serve as Elder Johnson. (My son's first name is Dallin also!)

Elder Hafer also is a great missionary.  The branch is very small and so he was busy doing much of the "ward clerk duties"; helping set up chairs, counting attendance, passing the sacrament.  His blue eyes were very striking among so many dark brown eyes.  It was easy to see his is a great help for the branch.

In sacrament meeting a new convert was confirmed.  Another very nice woman and her two young sons were attendance and they announced that they were scheduled for baptism in another week.  And another woman, a convert baptized just two weeks ago, said the closing prayer.  It seems they are having considerable success.  Its wonderful to see!  There was a great spirit as the members shared their testimonies.  I could feel it, even if I only understood 2% of what they said.  My wife helped fill in the gaps for me since she speaks Spanish.

Thanks for raising strong young men.  Here's a photo! 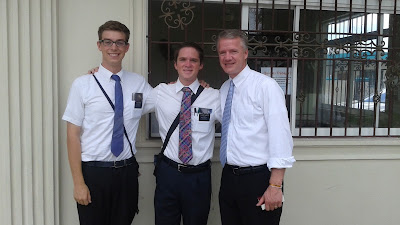 The cool thing that happened was that the man who sent this to us also gave them a referral via text.

"Elders, we met a security guard here at the hotel, who says he's a member of the church. We think he's been a member for about 6 months. He lives in Higüay. Will you contact him, or the elders in that city, and follow up with him? We'd love to hear how it goes. We gave him a Book of Mormon, and would like him to get involved with the self reliance program. We're guessing that he needs some fellowship. Here's his contact information: 123-456-7890 Edgar "Manuel".  If you mention to him that we met him in the parking lot of Barcelo Punta Cana, and our names,  he should remember us.  Thanks."
Posted by SunnyNell at 12:36 PM No comments:

Hello! Well, I would write a long, well-thought-out letter, but unfortunately, I'm still suffering from a severe cramp in my right wrist from last week's dissertation, so I think these pictures ought to describe the week pretty thoroughly. Ta!

Posted by SunnyNell at 12:16 PM No comments: