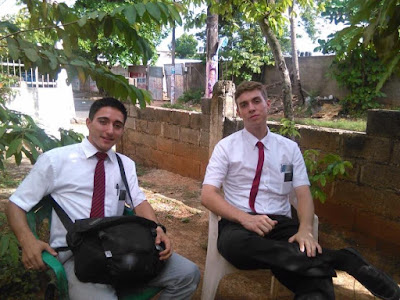 Well, time is short, but here are some pics. Also, transfers are here. This means that Elder Orchard (the rather 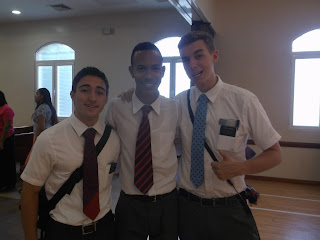 diminuitive fellow with spiky hair in the picture of him and me with Jeremy, a member, between us) will be finishing his mission and peacing off to Las Vegas tomorrow morning.

Speaking of peacing, I've been transferred! I'm going to San Isidro with Elder Koerper, a 6' 4" New Mexican who played baseball in college. We'll still be the zone leaders in Hainamosa. They're going to put sisters in my current area, hence they took both Elder Orchard and I out.

Speaking of which, I tell you what, I'm not very good at handling stress. On Saturday night, there was sooo much to do. We were supposed to compile a weekly report, finish stake conference, pack, make our area book all neat and tidy for the sisters, clean our house to sister standards, and a whole plethora of other things. 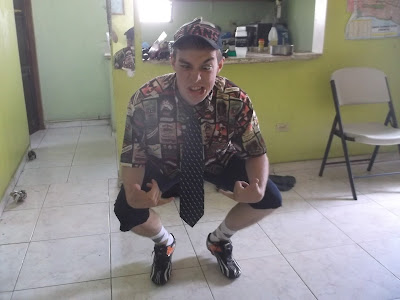 And so, as I often do when I have so many things to do, I got home that evening and didn't do one single thing. No, I utilized the ancient stress-management technique of collapsing on the floor and eating a quarter pound of beef jerky. Now, this did not solve my problems, but it sure made me feel better.

And so. With that in mind. I love you all, but well. I have a bunch of stuff that I've been putting off for two days so. Have a great week! 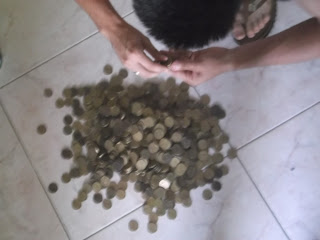 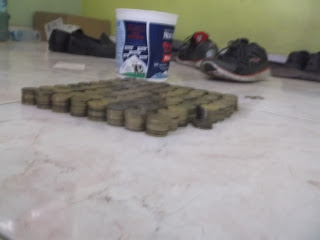 Posted by SunnyNell at 10:35 AM No comments:

Squat is relative. I'd say that technically only Elders Hutchins and Potokar are squatting. Strictly speaking, I'm whoa-lunging and Elder Zamora would be Tebowing.

I still have not found my camera cord, although I did buy an sd card reader. Right now I'm troubleshooting- Elder Potokar emailed me the attached pic. There will come more photos if I can get this consarn thing working. A ver. 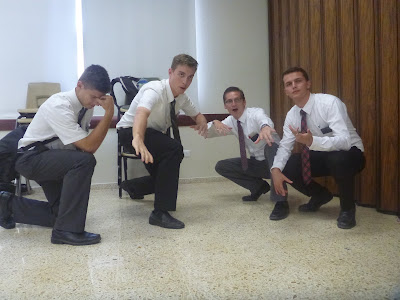 Posted by SunnyNell at 11:43 AM No comments:

Well I'll be. An actual salutation? I dunno when the last time I did one of those was, but I mean. It didn't really change the email at all, did it?

Well, it's week five of the transfer, so time's blowing by. Elder Orchard only has two weeks left and I can't believe that the clock is hammering down. It's like when you're surfing and you see a huge wave coming at you- You know it's coming and you kind of want it to get there and also really don't but it's gonna hit you whether or not you like it. Haha I've never actually been surfing before, so I don't know if it really feels like that, but that's what I imagine it feels like.

Let me tell you something. Being in the DR has upsides and I love it and all. But imagine you're sitting there. The Spirit is so thick you could cut it with a knife. You're about to invite someone to be baptized. You're just certain they're gonna accept. And then. Out of nowhere. Someone cranks an amp and your eyeballs start tangoing in your skull because the bass is vibrating so hard. Yeah. So that's a downside. In case y'all don't know what dembow is, I recommend looking up the song Tarzan by El Mayor. I do NOT recommend looking up a translation of Tarzan by El Mayor. Anyway.

So a couple of weeks ago, we did an intercambio with the elders of Sabana Perdida 2, and I was over there with Elder Aplanalp. We had an interesting experience that has been stuck in the back of my mind ever since. We were walking down the street with José, one of the members over there, when we saw a dog jump out of an alley and scare some poor girl in heels right out of her socks. We used that as an entrance and contacted her. She seemed very interested in the gospel and invited us to her house. We accepted. What followed were 90 of the most frustrating minutes of my mission.

She didn't set us up. Not really. But she never had any intention of listening to us. She was a Jehovah's Witness, and she was determined to whip us purple with the Bible. Now, I think she may have underestimated the formidability of Mormon missionaries when it comes to an old-fashioned Bible bash. She never really threw us for a loop, and from an outsider's point of view, I would humbly say that we had the upper hand for most of the conflict.

But from an insider's point of view (namely ours) it was a total failure. We may have handled every cross she tried to throw at us, but if anything, we reinforced her own conviction that she was right and left an impression of Mormon missionaries as pompous and contentious. We should NEVER have tried to fight it as we did. I suppose the important thing now is to learn from it and not repeat the experience.

Now, to be perfectly honest, I don't really know where I'm going with all of this. I don't know why I'm taking valuable time out of your respective days with this lame story, but I guess it just really struck me. One of the hardest things for me to accept as a missionary is how some people refuse to explore things outside of what they currently believe. Or some people who receive a strong spiritual witness of gospel truths eventually reject them because they like smoking or don't want to get married to their girlfriend or whatever. There was a time when I just wanted to grab these people and shake them and just shout, "STOP PLAYING AROUND, THIS IS FREAKING ETERNITY WE'RE TALKING ABOUT!!" And frankly, I still sometimes feel that. But. God respects agency. And I guess it's just a reminder of why we need to be so careful with how we use our own agency.

Anyway. Have a great week, errahbody!

P.S. There was a kind of funny moment there at the end with that lass. Elder Aplanalp tried to give her a Restoration pamphlet and she was like, "I can't accept that. There are images in it that offend me." and Elder Aplanalp was like, "Is that so? Well, does the cover offend you? No? What about this one?" and she was like, "Yes, that one." and so Elder Aplanalp was like, "Arright," and straight up ripped the page out. She started protesting like, "Hey, you don't have to destroy the thing," and then he just started tearing them all out and it was just so unexpected. It was pretty funny. Although I mean, she still didn't accept it, so it's whatever, but it was sort of a silver lining for the experience. That's all.
Posted by SunnyNell at 11:37 AM No comments: