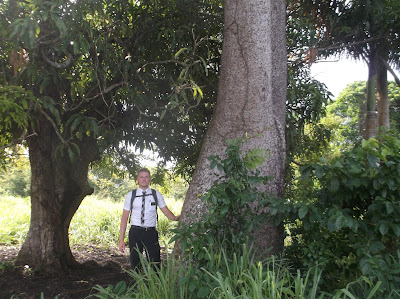 Happy July, errbody. Well. Wouldn't ya know it. I'm writing this from the internet cafe in Espaillat. Yes. THAT Espaillat. My birth area. The one where a very fat, very lost gringo touched down on November 4, 2014.

My great lozzy. What a whirlwind! It's weird to see everything through experienced eyes. At this precise moment exactly one month from today, assuming I don't get hit by a bus or struck by lightning or something, I'll be sitting in JFK International Airport. Eating Panda Express. I know that's really not bragging to any of you (except for Elder Jake Hogan haha) but it seems pretty stupendous to me.

But really, when I first arrived here, I was blown away. The 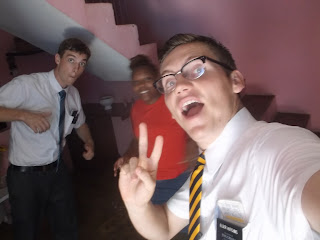 noise, the smell, the lack of grass, the street vendors, everything was just this Spanish-speaking cacophony and I thought that all things considered, I was probably going to die.

Things have changed. I feel at home in these streets. Spanish flows naturally for me now. I understand the nuances, the dips and rises, and I think it's beautiful. There's still no grass, but I forgive Espaillat for not being the prettiest barrio in the whole city. 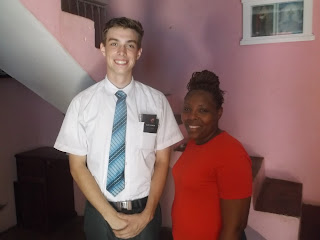 But after just the few visits I've made, I've received a testimony of sowing seeds. Let me explain. In my two transfers here with Elder Miller, we taught exactly 400 lessons. FOUR. HUNDRED. We worked like animals. I showed up to the house every single night feeling like a donkey had kicked me in the back. And even after all that, we had just one baptism, Wellington. I was so sick of fighting with people. I was about ready just to blow the place up. Do baptisms for the dead.

Then, today, I found out that four people who Elder Miller and 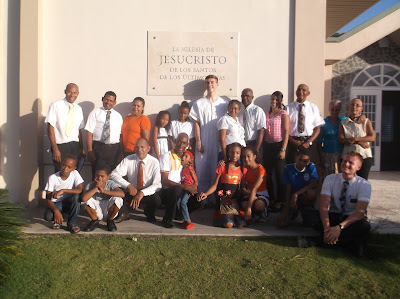 I found have been baptized since I left. Two of the less-actives who we brought back to church have gone on missions. Another couple we taught is preparing to be married and baptized. Walescak, who was baptized and whose husband we reactivated, is preparing to go to the temple to be sealed to her family for time and all eternity. And Wellington continues strong in the church.

And I didn't know about hardly any of it. I wouldn't have even known had I not come back to visit. And it blows me away. I can't realistically take credit, because miracles like that are a composite of the efforts of many members and missionaries and above all by the Lord. His work will always be done no matter who the person is that does it. Anyone could have done what me and Elder Miller did here in Espaillat. But we did it. We were blessed so completely, so miraculously, to be able to do it.

That to me is the miracle of the mission. I used to think the mission was a sacrifice. I gave up girls,studying, music, orange chicken, reading non-gospel books. I gave up my life.

And so God gave me another life. A better one. Infinitely better. I finally am beginning to understand what the scripture means that says, "For whosoever will save his life shall lose it: and whosoever will lose his life for my sake shall find it." And beyond just me, He blessed His other children through me, even with all my rough edges and unrefinedness. No, in the end, I didn't sacrifice anything at all. I invested it. And I have received one hundred fold every single thing I gave up. I have not been a perfect missionary in any sense of the word.

But that's okay. It really is.

Have a grand week! 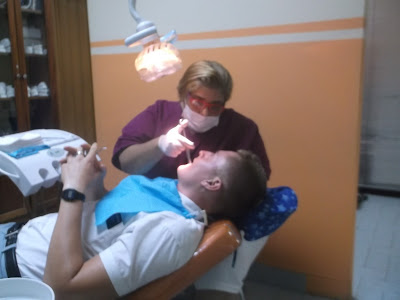 Posted by SunnyNell at 7:04 PM No comments:

Happy Independence Day! Things are going pretty dandily down here in San Isidro. Speaking of which.

So I'm here in San Isidro! It's still a capital area, and I'm actually only about a 15 minute guagua ride away from where I was before, so it's almost like I just moved houses and go to someone else's church. My new companion is Elder Koerper. We're an interesting companionship. Both tall guys (6' 3" and 6'4") and they can't pronounce our names. I'm JOH-soh and Elder Koerper is Elder Cooper. It could be worse. Elder Orchard was companions with a guy named Elder Croshaw at one point and their names were pronounced almost the same (OH-chah and Croh-chah) I like Elder Koerper though. Direct guy. The week before I got here, he went up an alleyway to bring an investigator named Wanda to church. She said she couldn't, which subsequently peeved Elder Koerper off (this happens often haha) and so, upon emerging from the alleyway, he saw this fruit vendor across the street with his son sitting by him. Elder Koerper crossed the street, pointed at this totally unknown kid and said, "HEY. COME TO CHURCH WITH ME." and the kid was like, "Hey, dad, can I go to the church with the big gringos?" and his dad was like, "Sure." And so he did. And now he has a baptismal date. Welp. I guess it works.

So every Wednesday, we have an english class in the church. Wait. First. I'm going to teach you a word. Conani. A conani is a gang of small children. This is  important. See, apparently something about learning english can't draw one single adult, and so when we showed up to the chapel at 6:30, we were faced with a conani of about fifteen kids. And zero adults. Well, we couldn't go in the church unless we had another adult, so we called some members until we finally got a brother who was willing to come out. In the meantime, the conani was getting restless. They were thirsty and wanted to go inside the church to drink some water. We. Did not care. We were fine just leaving them outside. Everything was going so smoothly until one of them figured out that I had a key. And the pestering began. And the nagging. And the whining. And the weeping and wailing and gnashing of teeth. I was just about to the point where I was weighing the ups and downs of kicking some kid butts when one of the little gremlins stuck his paw in my pocket and grabbed the keys. I, er, patted his hand and the keys slipped out. There was a quiet clink as they hit the ground.

And then all hell broke loose. I dropped and covered the keys as the conani swarmed like a school of piranhas, punching, kicking, pulling my hair. One little punk bit my right hand, which logic sort of boggles the mind when you consider the keys were in my freaking left. So here I am. A 6' 3", 180-pound adult 'Murican missionary being mobbed by a group of little Dominican kids like we were in the Walking Dead, I finally managed to stand up and toss the keys to a red-faced-from-laughing Elder Koerper. He caught them, took one look at the advancing conani, and casually tossed the keys on the pavement. They snatched them up and in one cackling horde stampeded into the church. BUM. MOVE.

Anyway, today is the fourth of July. Independence Day. Don't really know what I'll do to celebrate it. Independence here happened in February. Last year, I still bought a hamburger, drank Coke, and sang The Star-Spangled Banner on the roof of the Los Solares house with Elder Tillmond. It was patriotic in its own sad little way. I enjoyed it.

But being a foreign missionary has really been interesting on a couple of fronts. On the one hand, I've gotten exposed to a different culture. But it's also been fascinating for me to be exposed to my own culture from a foreign point of view. I could go for a long time about the differences, but the point I really want to touch on is the sameness.

The Dominican Republic and the United States are very different places. Very different. Traffic is organized chaos. Laws are more like guidelines, anyway. People are sooo open. You walk up to any colmado guy and as long as you're open with him, he'll treat you like you've been friends for years. It's nuts. People here are by and large dirt poor, but if even us, big foreigners from a country with a reputation here for being rich, were to knock on the door of some hovel and say, "Please give us some food, we're very hungry," they would go through hell and back to get us at least some bread and rice. Employment here is sketchy at best and savings plans aren't overly important because you can't save when you're scraping a living. They print bible verses on peanut wrappers. (I once walked into a bathroom in Verón, and all over the walls, people had graffitied things like, "Christ is coming" "Repent!" "Satan is a liar" "There's no happiness in sin" etc. And I'm like. Well. Graffiti's bad. But. Better than American graffiti.) Teenage pregnancy is rampant and families that are divided and scattered all over the place is the norm. I can count on one hand the number of families I've met that were just two parents and all their kids in one house.

And you know what? Their desires are just about the same. They want a job they like. They want stability. They get self-conscious. Girls want to look pretty. Guys act stupid to impress girls. They worry about whether or not the girl who sits in the colmado is gonna reject them or not. They want to learn the guitar. Children dream of being professional athletes. They dream of changing the world. Everyone just wants a happy, healthy life, being accepted and surrounded by their loved ones. They want the same thing.

This is a lesson that should be obvious. That people have the same fundamental needs and desires no matter where they're from. But I know that I always thought of people here or in Africa as people whose entire existence was devoted to carrying water jugs fifteen miles each way every day and eating millet and walking in the bush. And it's not. There are different standards of living, but people are people, and we are no more people than they are. Because from a Dominican point of view, that right there is a hallmark of Americanism. The arrogance.

I don't really know where I'm going with all of this. I'm slightly unfocused. But. We're not in this life to compete with each other. We're all playing the same game. And we're all on the same team.

Posted by SunnyNell at 8:31 PM No comments: