¡Holá Mormónes! (and other assorted nice people)
It's another lovely day in Santo Domingo, and hey hey, we're halfway done with the MTC experience. Time is really starting to pick up. It seems like only yesterday I was here typing up last week's email. I shan't complain though; I don't mind the time flying. It means that more and more, this is becoming life. And hey, although we have eaten dog here, we also get pineapple and mango with almost every lunch, and let me tell you something- Dominican pineapple is some good stuff. Every bite results in an explosion of ambrosianic juiciness that simply does not exist in American pineapple. And yes, to my knowledge, the word "ambrosianic" is not actually a real word. I made it up because there is a lexical gap in the English language where some chump forgot to make a word capable of accurately describing the sensational scrumptiosity of home-grown Carribean fruit. 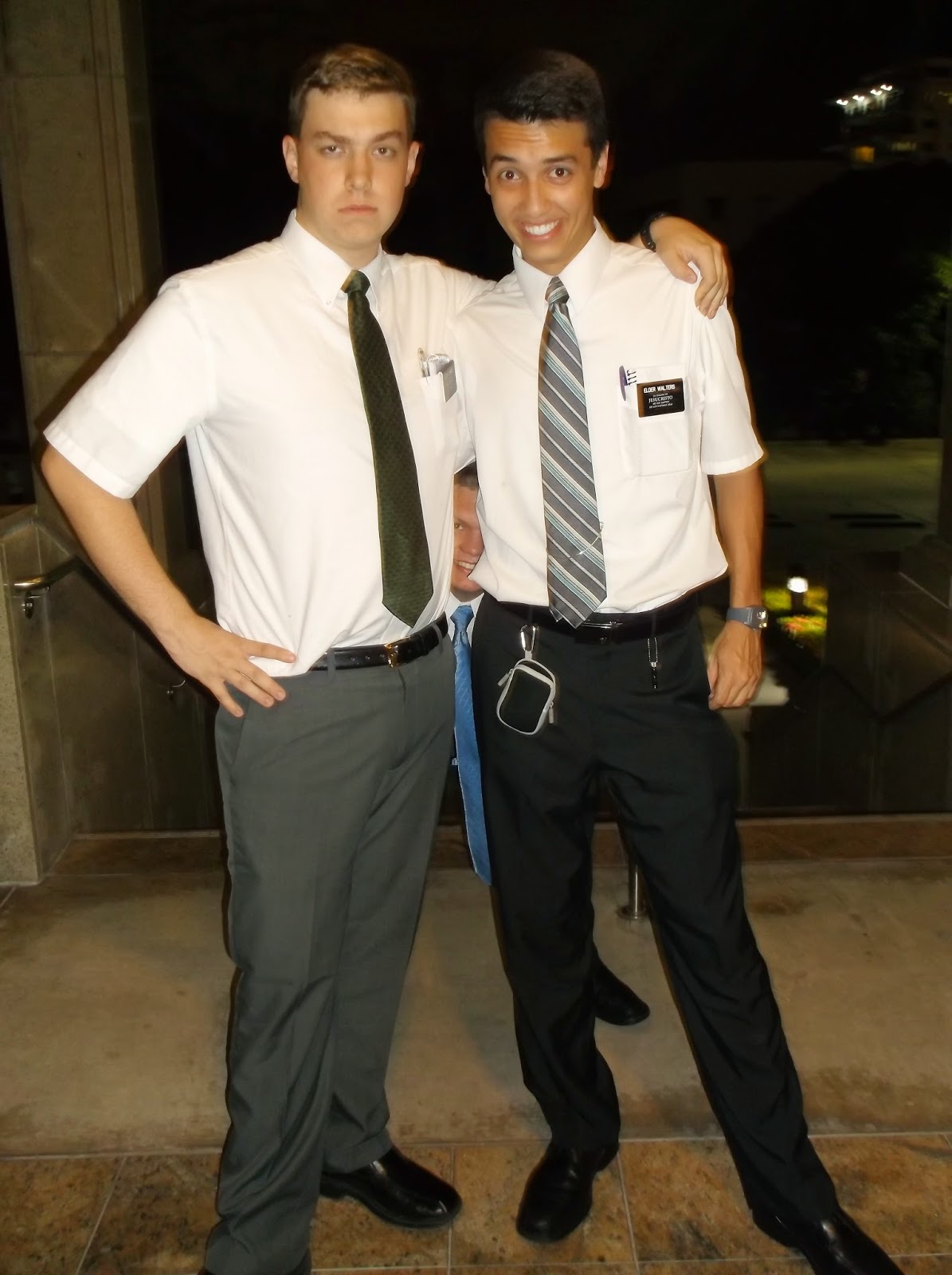 Probably the best part of this week was last Friday, when we had the opportunity to go to the university a few blocks from the Compound and go street contacting. An awful lot of the contacting involved us repeatedly asking people to talk slower and much was difficult to understand. However, it was an incredible experience because despite only being here for two weeks and often struggling to understand what people were saying, the people were all very nice and willing to help us express ourselves, and we were able to connect with actual, authentic, nonmember, not-church-employed Dominican civilians and we had many meaningful conversations and placed several Books of Mormon. On the other hand, this was also the site of my language gaffe of the week. A gentleman asked me why the Atonement was important, and I replied that it was because through the Atonement, we could be cleansed of "nuestros pescados." Yeah. The word for sin is pecado. I told the man that through the Atonement, we could be cleansed of our fish. Well, we live and learn!
The third paragraph seems like a good place to thank my lovely, charming, never-praised-enough mother for a couple of things on a musical note. Firstly, for forcing me to learn how to play the piano. I eventually picked up the desire to improve, but if it wasn't for her initial encouragement, (e.g. threats of grounding, severe bodily harm, and removal of all things good and pleasant in life. Oh, and occasionally bribery. Nyahaha. :) Love you, mom) I never would have learned. And the ability to play the piano has vastly blessed my life and experience here. Also, I will never forget the sacrament meeting when my mother pointed at the bottom row of notes in the hymn book and said, "Hey, Dallin, let's sing this." She then proceeded to sing the bass line until I learned how to do it without help. And yes, she did sing the bass line an octave up. She's an alto, not a circus animal. And although my singing voice isn't exceptional in any way, being able to sing parts has enabled me to participate in many swell renditions of hymns as well as some tomfoolery. We sang a lyrical rearrangement of the hymn Nearer, My God, to Thee in which we replaced all the lyrics with the words "Holá Mormónes."  Repetitive, but we actually sounded really good and we had the whole room cracking up at the sheer inanity of it all. Also, my mom sent me sheet music, which is kind of the shortcut to my heart. Mom, you are a Saint and I love you. Moving on.
Life in the MTC has been funny as always. One of my roommates, Elder Empey (he's the one in the front of the attached picture) is quite the character. We were talking the other night and the conversation went about like this: 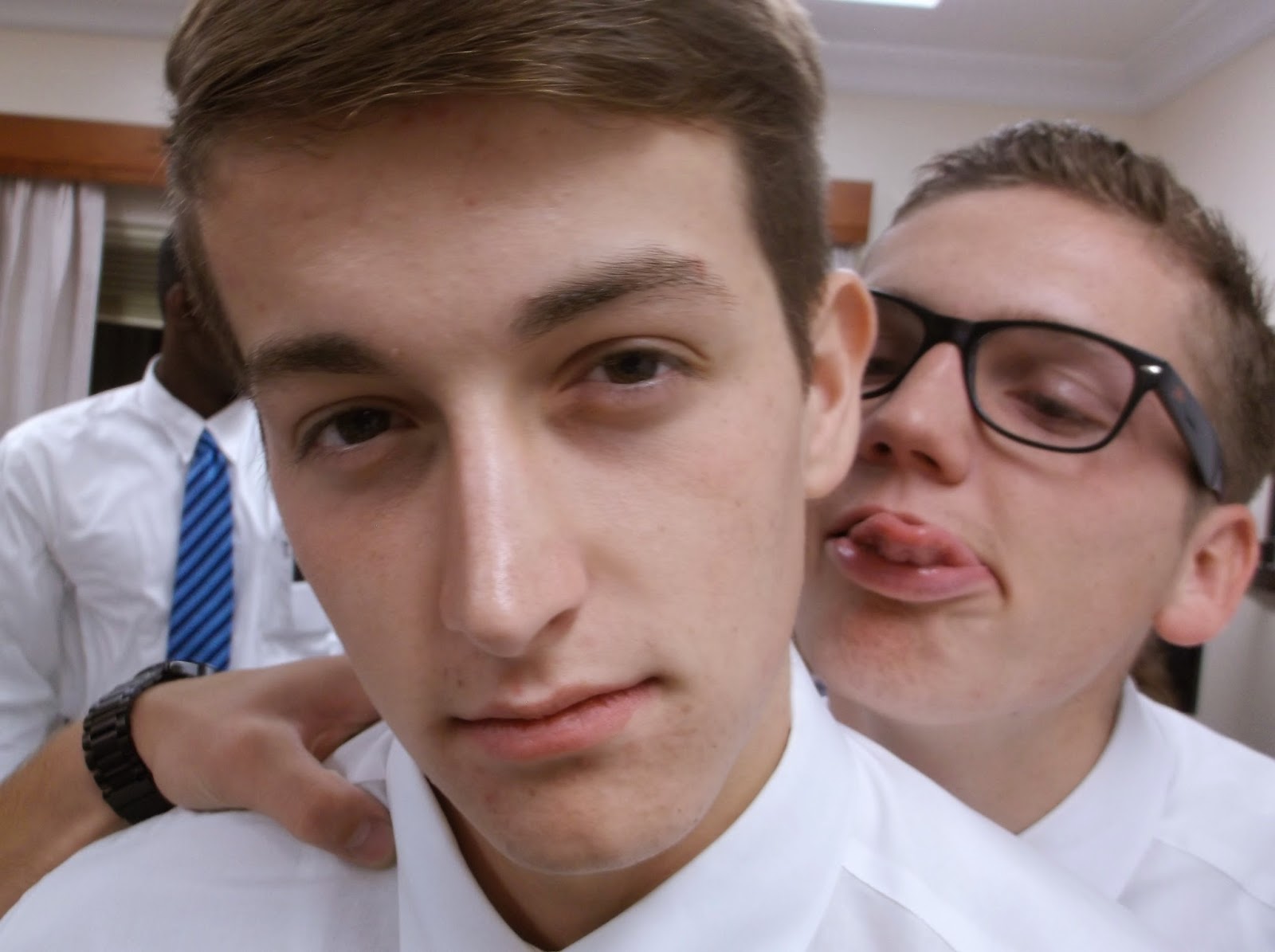 Maybe it was more of a you-had-to-be-there-moment, but I was down for the count. Cracked me right up. And then, ten minutes later, he comes in with a gold-framed picture of Jesus and yells, "Hey guys, we got another Jesus picture!" Every room has one, including ours. I was like, "Dude. Where'd you get that?" and he said, "I don't even know, man, but this is awesome." Then he tried to hang it on the curtain rod over the window and accidentally ripped the rod out of the wall. The picture of Jesus went plummeting to the ground and the frame cracked. Elder Blount quipped, "Now you've done it, Empey. You stole a picture of Jesus and broke it. Now you're going to Hell and you still won't know Spanish." Again. I was out. Now, to be clear, Empey is a smart kid and I love the man to death. He just says silly things sometimes. Speaking of silly things, tune in next week to hear the tale of the creation of the No Pull-Out Squad. 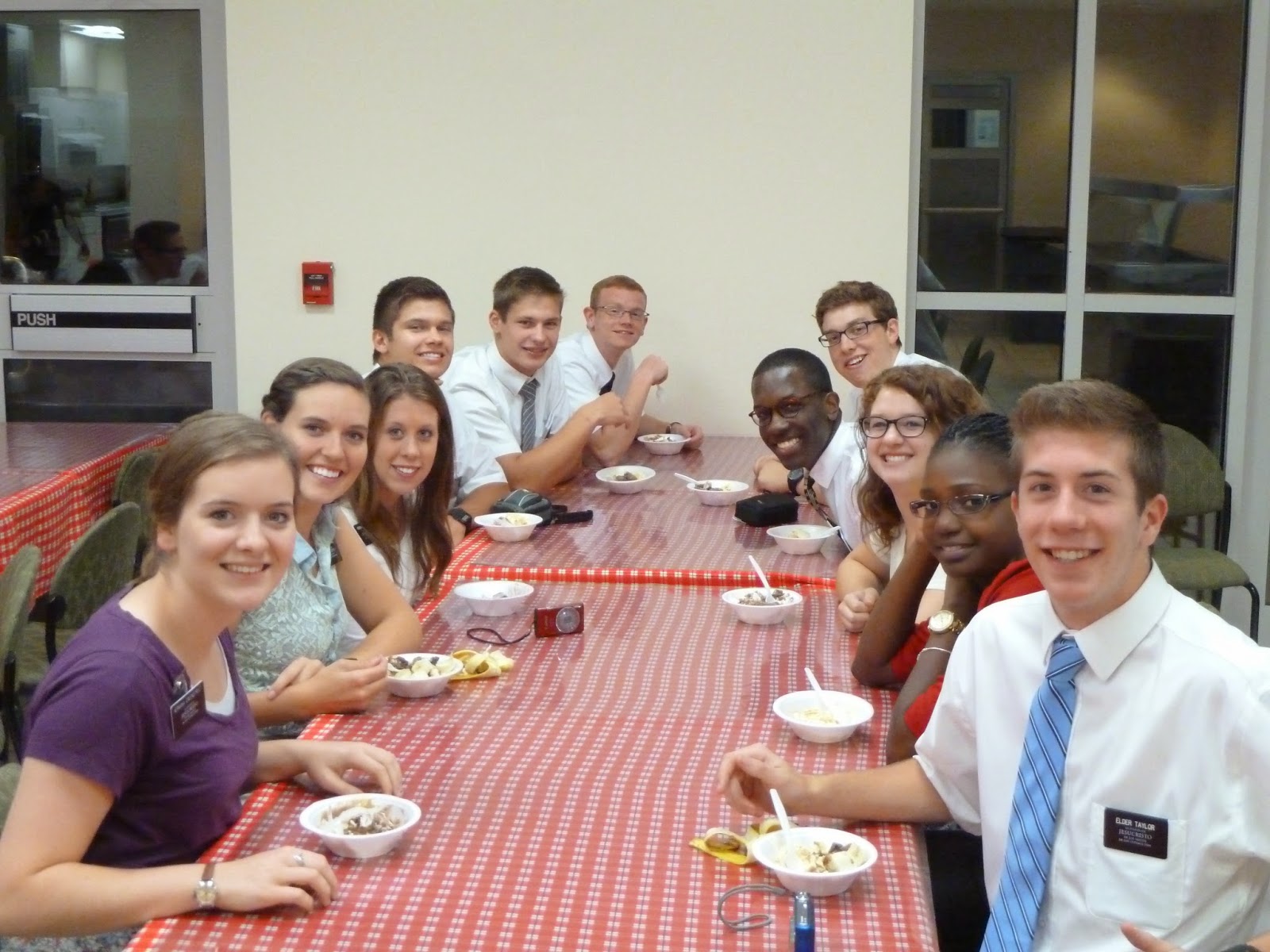 So on Sunday, we watched a devotional given at the Provo MTC by Jeffrey R. Holland. We watch Provo devotionals at least two or three times a week. The crowd is always huge there, and I find myself grateful that I am in an MTC where there are only fifty other missionaries. Everyone knows everyone and the cohesiveness of the group extends beyond districts or missions to encompass the entire MTC. There's always a feeling of friendship and family here to a degree that I can't imagine being replicated among any other randomly selected group of young adults who've spent only three weeks together after having never met once beforehand. But I digress.
The devotional was essentially an hour-long testimony. By Jeffrey R. Holland. On missionary work. That man spoke with a tongue of flame and cold steel. By the time he finished, I would have been more than happy to dive head-first into the fires of Mount Doom had he been so inclined to ask me to. He spoke of his own mission experience and how although there are times to have fun, this work is serious. He also said that every time he sees a missionary who isn't taking his calling seriously, he wants to knee him in the throat. His words, not mine. He said even after he died, if the Lord permitted him, he would haunt us, tap on our windows, and let the air out of our bike tires- whatever it takes to get our attention.
All joking aside though, the magnitude of what he was saying really hit home, and I felt the Spirit testifying to me, and it finally sank in that this is my life now. Not only for the next two years, either. The things that I do here will stick with me and shape me for the rest of my life. People here always talk about going back to the real world, back to real life. This is the closest thing to real life that ANY of us will EVER get. That old life we once lived, that person we used to be, those things are gone. They do not exist anymore. And it's beautiful. Because from the ashes of the past emerges a better future. We've only been here for three weeks, and already I've felt the gospel shaping my life in ways I never imagined. I'm still Dallin. I still hate mint, love the Chargers, and enjoy nothing more than having a good laugh and cracking a stupid joke. But more and more, I make better choices, I feel more confident in myself, and my testimony grows daily.
As many of you remember, I know a thing or two about making stupid mistakes. Senseless, moronic, thoughtless mistakes, whether it was struggling with church attendance, letting both my body and my mind go soft through unimaginable neglect, or my nocturnal escapades of a year ago. Even little things. In my three weeks here, I have experienced no small quantity of shame. Bar none, there is nothing in my life that I regret more than the unkind things I said or did in the name of a joke. So believe me when I say that I KNOW that this was not a mistake. This was the right choice. In fact, the decision to come serve the Lord out here is the best decision I have ever made in my entire life. If any of you are unsure whether or not a mission is right for you, stop wondering. Stop sitting around thinking about going. Do it. Just get up and do it. Whatever reservations you may have will take care of themselves. Have faith, trust in the Lord, and never allow yourself to sit idle when you could be taking action.
So! I love you all. Send me word from the Riddemark (I probably butchered that spelling. Someone correct me, please.) I also wouldn't be opposed to pictures from the States. It's nice to see as well as read what's going on. I miss you all more than I can say, and I'll write again next week.

Posted by SunnyNell at 8:00 PM