Right. So. I try to keep most of my emails pretty lighthearted and funny. To be honest, I sometimes worry that if I didn't, people would stop reading them. But, I was sitting here, basking in the glory of the prospects of a missionary Thanksgiving and I just wasn't feeling it. So. Well. Whatever. This is what I've had on my mind all week. 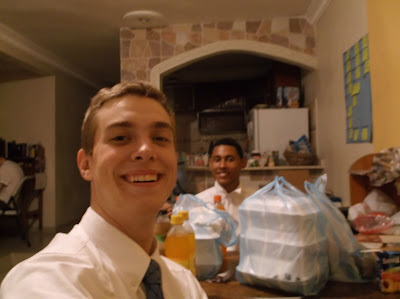 Whenever I hear returned missionaries speaking or I read other missionaries' letters, it sounds like their missions are just these incredible spiritual experiences where every day they go out and teach the gospel and stretch out in the glow of the guidance of the Holy Ghost and even though it was hard, they love every minute.

Well. That hasn't been my experience. Maybe that's because of my own attitude or the geography or the culture of this particular mission. But for me, a mission has been hard. It's been really hard. I'm finally to where I can say that I love it, but it took more effort than I care to admit to get there. It's funny, though, because perhaps the most important moments in that process weren't manifestations of angels or mind-blowing spiritual experiences generally or Eric Weddle himself descending upon a winged wolf to carry me along specifically. The most powerful moments on my mission have been small. So small that the people who did them might not even remember. They weren't grand acts of valor or courage. It was always simple charity. Today, I want to share some of those moments. Three. Yes. Three moments of charity.

First, I think it's only appropriate that we start at the very beginning. I started my mission in Espaillat with Elder Miller. Training is a tough time to begin with, but there was one particular day in which we walked into our house's colmado after a long day to buy a Coke. I approached the counter, pulled out fifteen pesos, and pointed at the fridge. The guy quipped something. I just kinda stared. Another customer started laughing and shot something at the colmado dude. He then smirked and quipped something else. I had no idea what the crap was going on, but before I knew it, the entire colmado was rocking with the sound of people laughing at the lost gringo. I was already tired and my mind was fried and I was sick of Spanish and being catcalled and I just wanted my freaking Coke. I just turned around and walked out empty handed.

Me and Miller climbed up the stairs to the house, not saying anything, and quietly planned. We finished and I walked to the back room, took off my tie, and flopped down on my bed, facing the wall and hating everything about my existence. Five minutes passed when I heard Miller's voice. "Johnson. I made you a sandwich in case you're hungry." He paused when I didn't respond and then continued. "Hey. Those guys are all losers. You're a great guy and you're gonna be a fantastic missionary. I'll be out at the desk if you need anything." And he left.

I turned slowly around and looked at the plate he'd left me. It was a signature Miller triple decker PB&J. Those things were so thick and I didn't even really like them. But. I looked at the sandwich. I looked at the empty doorway. And everything was okay.

A couple of months later, Miller was gone. I was still in Espaillat with my second companion, Elder Lora. Most of you probably don't even know I had a companion named Elder Lora because, well, I wrote a grand total of one sentence about him. See, we didn't get along. We were together for three weeks and it's fair to say that we were not friends. It wasn't his fault. He was just unhappy because with less than three weeks left in his mission, he'd been transferred to a new area with a greenie American whose Spanish was less than incredible. I'd have been unhappy too.

Despite any companionship friction, though, I loved Espaillat. I loved it with all my heart. I still do. And at the beginning of that transfer, I'd been told that although my companion was going to finish his mission, I'd be left there indefinitely. Well, three days before he was out, the office called me and told me that, psyche, sorry for no warning, but I was going to be transferred. I'd be leaving. I hadn't told anyone. There wouldn't be time to say goodbye. Heaven knows what was gonna happen with the area. We'd be whitewashed. And I was furious. FURIOUS.

My reaction. Wasn't great. I. Um. Starting yelling. Everything went kind of fuzzy. I said some unkind things to Elder Barlow. And may have been using. Er. Colorful metaphors. His untainted ears were burning. But I essentially ended up storming back into the room, once again, and flopped down on my bed, seething.

About a half hour later, Elder Barlow stuck his head in gingerly. "Johnson? Are you calm?" I was like, ".......yes." And he said, "Hey. Um. We talked with President. He says you can stay until Tuesday. It's not perfect. But. You'll be able to say goodbye." He waited a second and then said, "And also. You should know that it was Elder Lora who made the call."

When Elder Lora left that Thursday, he left while I was in the shower. He did not say goodbye. He didn't take a picture. Didn't write in my journal. And as far as I know, he and I will never meet again and he probably doesn't care. But I will never forget that moment.

Fast forward to the next training, only this time, it's me in the trainer's shoes. My son, Elder Leiter (said like Lighter), is incredible. I love this kid to death. However, being a trainer can be stressful. Especially since I am also a very involved district leader, my nights are crazy. I sometimes stress a lot because I'm so busy trying to take calls, motivate six women who I can't directly interact with, making plans, and trying to assure the zone leaders that yes, we are doing fine and yes, everything is getting better.

Last Wednesday, it was our first full night in Consuelo. My shoes were filthy and I had to get them cleaned because Thursday was district meeting but there was just no time. I was trying to get everything pulled together and there were just so many problems and I was pacing furiously on the back porch trying to figure out how on earth to say "shotput" in Spanish to the zone leaders (one of the sisters' investigators with a baptismal date fell because he had to go train for the Olympics. Seriously.) and by the time I finally finished, it was past lights out, my shoes were still filthy, I was nearly in tears, and I was sick of being a district leader.

Exhausted, I shuffled slowly toward the room, ready to collapse, when I noticed my shoes. They had been scrubbed clean of all dust and scuff marks, brightly polished, and were sitting next to the door, ready for district meeting. I peeked into our room and there was Elder Leiter, lying on his side, sound asleep.

And I will always be grateful for that.