Happy Monday, errahbody! It's been a pretty good week. We preached the gospel. It rained a smidge. And I also learned the important difference between a "barita magia" (magic wand) and a "batida magia" (magic milkshake). If that's not success, I don't know what is.

I love my area. I really do. It's reminded me a bit of home. It's full of nice people. It's also confirmed to me just how well the gospel of Harry Potter has been preached throughout the world. We were teaching a less-active guy out in the boonies of the boonies where there aren't even roads, just trails. Nor are there cows. Just pigs that look like cows. 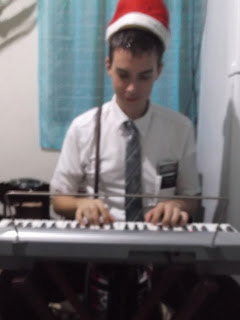 And somehow, we got on the subject of childhood disappointments and I mentioned that perhaps the saddest moment of my life was my 11th birthday, when I ran to the mailbox to find I hadn't gotten a letter from Hogwarts. My muggleness was confirmed when Dumbledore didn't reply to the letter I sent to him (although in hindsight, that kind of makes sense. I turned 11 in 2006 and since Harry started school in the late 90s, he would've been a sixth year in 2004 or 2005 at the latest, which means that chronologically speaking, Dumbledore would've been too dead to respond..... Holy hippogriffs!!!!) Before long, we were deeply engaged in a conversation about whether it's possible to Apparate to safety if you fall off your broom and if so, why don't people do that from the ground? Why isn't high-altitude Apparition sky-diving a thing?

And then the ridiculosity of the situation hit me. 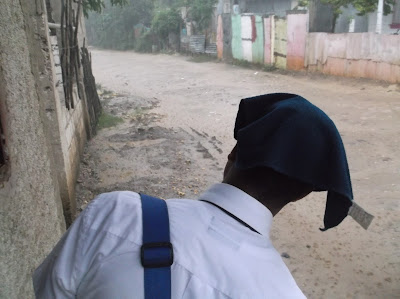 We were sitting under a guava tree in front of a corrugated tin shack in a rural suburb of a rural suburb that would have to at least triple its average daily income to be classified as "poor". Talking about the feasibility of Aparition skydiving and lamenting in turn, "I never liked Malfoy," and "Severus didn't have to die like that." Haha so that's Consuelo for you.

Oh, it's also the area where my mission dad died. (went home) Yup.

So I was pretty tired last Thursday. We'd been out in the pouring rain all day and I was cold and ready for bed. I flew through the calls with the sisters and zone leaders and peaced out of consciousness a half hour early. Well, I'd been frolicking through raspberry fields in Dallin Happy Dreamland for only an hour or two when when all of a sudden, I was jerked awake by a noise in the kitchen. First it was just a quiet tapping. A gentle noise. Like little celestial teardrops. And then I could hear the sound of ripping. And then something that sounded like a sort of choked screaming. Welp. I wasn't sure what the Freddy Krueger was out there, but I was sure that I was gonna stay right the heck under my sheet and calmly figure out what to do about my urine-drenched trousers.

Well, I'd only been there for a couple of minutes, right about the time when the pleasant part of having wet yourself wears off and you're just cold, when I heard the voice of Capt. Henry Pearson Crowe echoing in my ears, "You'll never get the purple heart hiding in a foxhole! Follow me!" Goshdangit inspirational World War Two quotes. Fine. FINE! I didn't know what was interrupting my field frolicking with the sounds of the folks in Tartarus, but I was gonna find out. Or it was gonna kill me. Whatever. I threw the sheet off and dragged my sleep-drunk derreire into the entryway of the kitchen. I stared intently into the darkness for a second. The ripping and yowling stopped. And then a sleek black shape shot out of the shadows and darted toward me.

Okay. So. I have to clarify. I wasn't exactly sure what to do in such a situation. My constitution when it comes to dark spirits and hellhounds and other ethereal thingies that want to kill me isn't really. Um. Bulletproof. So I contemplated my options. I could cry for help. Maybe try to beat the snot out of the thing. I briefly considered vomiting. Finally, I made a split-second judgment call and decided on staggering backward and inhaling sharply, sucking what felt like a liter of spit into my windpipe and nearly choking to death. If this sounds like a stupid reaction to you, well, stuff it. It was unconventional, but darn if it didn't work. That sucker ran right past me and jumped out the window. And that was when I realized, heart pumping and red-faced, that it was a cat. . . A FREAKING CAT!!!!! It had come in through the window and choked on a chicken bone it scrounged out of our trash. GAAAAHHH!!!!!

Apart from that, it was sort of a good week. It was a good lesson on perspective. It rained and rained and rained and was a very large pain in the buttocks. I got sick and we spent one day in the house where I spent all of my free time in bed and the other half in the bathroom. There were a couple of fights with people. One guy who looked like the goldenest of golden contacts stopped us in the middle of our first lesson and was like, "Would you doubt that I'm one of the gods of the Apocalypse?" And I was like, "Uh, yes?" and he kicked us out of his house into the aforementioned rain. We got rained into the branch president's house with a chorus of children who were either impersonating drunk walruses or singing Christmas carols FOR FOUR HOURS!!!!! This week very well could have sucked.

But then, we were able to share the gospel with many wet and muddy people who needed a pick-me-up, we learned an important lesson about how to let down people who think they're deities, I got yet another dose of appreciation for good health, and we got some quality bonding time with the friends of our branch president's family. Oh, and we had two investigators pass baptismal interviews which means that I'm baptizing for the first time in four months and more importantly, two children of God are going to make the first covenants with their Heavenly Father. Huzzah!!!!!

Yeah, it was a good week.

Hoping y'all have one of your own,
Dallin

Posted by SunnyNell at 3:17 PM