Holy cow. It is hot. I'm in awe. I've been here for coming up on nineteen months and it still blows my mind that the earth can get so blasted hot. I understand with my conscious mind that the large incandescent ball of several million megatons of rapidly fusing hydrogen and helium in the sky here is the same one as in Utah, but good gracious, how does it get so HOT?

So yesterday, our branch president invited Elder Hafer and I to come teach a referral in his house. She was a lass named Franchesca. Well, we headed over and started a pretty by-the-book lesson with a solid How to Begin Teaching followed up with Lesson One. We got through prophets and the apostasy and everything was going so smoothly. We flipped to the page in the pamphlet with the picture of Joseph Smith in the Sacred Grove and I told the story of Joseph Smith and recited the First Vision and then, with the words "Hear him!" echoing in her ears, I turned it over to Elder Hafer. And. Well. We had a hiccup. A rookie mistake, really. He went straight from the First Vision into the Book of Mormon. No transition. No segway. No mention about God saying that none of the churches were correct or the fact that Joseph Smith had ever, you know, restored the Church, or question about how she could know if it was true. Just right to the Book of Mormon.

I sat there, watching Franchesca's face getting more and more confused as Elder Hafer rattled on. He probably went for a solid ninety seconds, barely stopping for breath. I thought about what to do. Deeply contemplated punching him in the jaw. I ended up just praying. And then. Elder Hafer finally turned the page in the pamphlet, which had the next point, "THE RESTORATION OF THE PRIESTHOOD" emblazoned in bold at the top. His breath kind of caught in his throat. He looked up at Franchesca and then back down. He looked at me and gave a kind of strangled laugh. His face was alternating between bright red and white as a sheet. It was actually very funny. His lips were twitching but nothing was coming out. Finally, still looking at Franchesca, he managed to croak out, "Bro. Help. Help, I done messed up." I lost it. I was laughing so hard. Franchesca and President Guerrero were also laughing, although they didn't know why. Finally, we settled down and we got things back on track. She accepted a date to be baptized in May. Great lesson.

But apart from all of that, these last two weeks, we had a marriage and three baptisms. We've been so blessed. The first was a couple named Miguel and Rossi. They're such special people. We had some challenges (such as having to get past an airport, a two-mile long road, and two security checkpoints with shotgun-wielding guards to get Miguel's ID papers to get 'em hitched. Seriously.) but in the end, good prevailed and we had a BEAUTIFUL EXPERIENCE that deserved all caps just to show you all how dang beautiful it was. 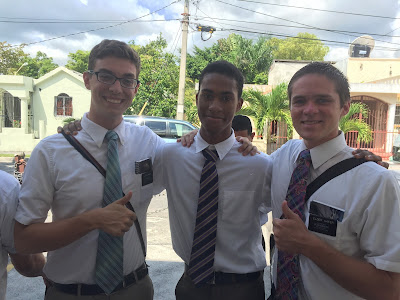 And then, the guy who was baptized this last Saturday was named José, just like twenty percent of everyone else on the island. José was just prepared. From the beginning. We honestly had very little to do with it. It was beautiful anyway.
But hey, that's us! Life's good.

Much love,
Dallin
Posted by SunnyNell at 7:58 PM