Happy Tuesday! I couldn't write this yesterday because yesterday was a crazy Monday and I can't wait to tell you all about it. So. Let's get to it.

At 12:45 pm yesterday morning, Elder Hafer and I found ourselves in a judge's office in the Verón city hall with our branch president and a lovely couple named Jordanny and Nailín. They were getting married in preparation for their baptism the same night. And the fact that I could write this last paragraph is a miracle.

Unlike the vast majority of our human interactions in the 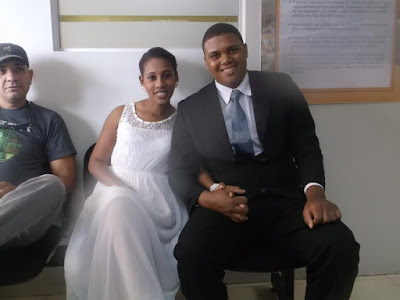 mission, Jordanny actually contacted us. He stopped Elder Hafer and I in the street and was like, "Hey, you guys are Mormons, right?" and we were like, "Well. Yeah. Mormonazos." And he was like, "Cool. I have a buddy named Fernando who's a Mormon and he's pretty legit." So we were like, "Hey, that's awesome. Do you have any specific questions we can answer for you?" and he was like, "Yes. What do I have to do to get baptized?" After we picked our jaws up off the ground, we were like. "Wow. That's the best question we've gotten all day." And so it was. We met his wife, Nailín, which actually complicated things somewhat because, like roughly ninety-eight percent of all couples under the age of 25 who live together in this country, him and his wife were not married. But they were both very receptive and they love each other and so they agreed to get married and then baptized. This was back at the end of February. Everything was going so smoothly.

Then the hiccups started. The initial marriage/baptismal date was set for April 9. Things were proceeding pretty well until the last Sunday in March, when we were going to announce the baptism. Jordanny pulled me aside and told me that they had had a fight and that they were going to call off the wedding. It was nothing serious, just a lover's quarrel where they both said things they didn't mean. And so, they still wanted to get baptized, but they were going to get separated in order to do it.

Well I wasn't about to swallow that. We'd planned to go into the office on Tuesday to put the appointment to marry them and I get very grumpy when I have to change my plans. I don't consider myself a terribly stubborn person, but. Well. I don't always put my mind to it, but when I put my mind to it, I could challenge a brick wall to a staring contest and. Okay. I probably wouldn't win, because, I mean, let's be real here, it's a brick wall, but I would stare at a brick wall for a couple of hours, which is more than most people would do. And so Elder Hafer and I went to their house on Sunday. And Monday. And we battled with them. Elder Hafer talked to them about how much God loves them while I looked for scriptures in the epistles of Paul because if you want to rebuke someone, Paul's your man. And when Tuesday arrived (Tuesday being the day we had to go put the appointment) they were still very set on separation, so we went that day too. Finally, defeated and out of any other ideas of what to do, we left them a heartfelt testimony and told them to call us if they changed their minds.

Elder Hafer and I were trudging melancholaly (I dunno if that's actually a word, but it's pretty fun to say) down the road, not saying a word. It was really kind of depressing. Finally, Elder Hafer said, "Well. What do we do now? We were gonna go put the appointment, but...." And then it hit me. What were we doing? Who were we to take the celestial task of touching the hearts of God's children upon ourselves like that? And so I said, "Elder Hafer, we are going to say a prayer and then we are going to see with the eye of faith and act with that knowledge that God will touch their hearts. Sometimes God's children make silly choices, but NOT TODAY. They are going to get married, and we're going to prepare the way for Him to bless them." And so we did. We had fought with them for three days and they still hadn't said yes, so we went and we put that appointment anyway. We walked out of the office at about three thirty pm. At five, our phone rang, and it was Nailín. "We changed our minds, we're getting married!" And the ensuing dancing on the part of Elder Hafer and I (which took place on the median between a busy highway, I'll have you know) attracted such attention that a truck of tourists literally stopped to take pictures. Now, I don't know if that means that we forgot our place as representatives of Jesus Christ, but it felt awfully good. 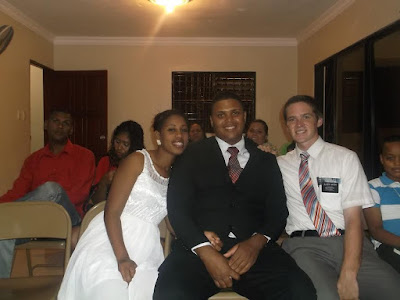 Despite this victory, they didn't actually get married and baptized on the ninth as planned. On the sixth, Nailín's oldest son was hit by a semi. He lives in the capital, and due to their economic situation, they had to take him to one of the atrocious public hospitals there. We're told that because of the hectic nature of these hospitals, if the sick or injured don't have someone healthy with them and something happens, the doctors will take hours to get to them, which can result in serious complications and sometimes death. So being the excellent mother she is, Nailín immediately rushed off to attend to her son. This was not a problem we would ever fight her on, but once we were assured that her son was alright and was expected to recover, we were very worried about their spiritual well-being and so we once again turned to the Lord and supplicated him for help. He answered in the form of President Ahmad Saleem Corbitt.

President Corbitt went to the hospital to visit Nailín. He told us afterward about the experience. He went in and got to know Nailín some and then asked her son if he would like a priesthood blessing. He responded that he did. Now, they were sharing the room with about ten other patients, and so President asked them all to turn off the TV and other distractions while he did the blessing, which they did. It's one of the blessings of being in such a proudly Christian country. President blessed her son and then, with everyone looking on, he turned and asked if they wanted him to pray for all of the children there.

And so it was that the entire pediatric ward in the Dario Contreras Hospital in Santo Domingo bowed their heads and listened in reverence to the humble, heartfelt prayer of a Mormon mission president from America. I wasn't even there and it's still one of the most precious moments of my mission. 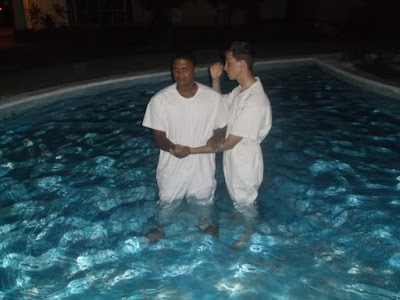 And so, finally, yesterday, Jordanny and Nailín were married by the law and then baptized as the newest members of the Church of Jesus Christ of Latter-Day Saints. The service was so beautiful. Everything went perfectly. Well, apart from the fact that I had to baptize Jordanny three times, which kind of boggles the mind when you consider that I dropped him on the second attempt. The problem was that we were baptizing him in the kiddie pool, which is fine if you're five foot four, but where Jordanny is about six feet tall, the water only came up to about two inches above his knees. We wised up and the third time, we moved to the adult pool and it worked much better.

Experiences like this only reinforce my testimony. In spite of all the struggles and challenges we faced along the way, it's been a worthy fight. Every time we visit them in their home, we can feel a spirit of love and peace that did not exist there the first time we crossed that threshold. The Lord has helped them to find a love and devotion to him and to each other that I want emulated in my own marriage whenever that day comes. It's a miracle how He's been able to change them in so little time and I can't wait to see where they'll be in the months and years to come.

So! Another week has passed out here in Verón. As of myself, I just feel full. Full of empanadas, full of happiness, just full. The mission isn't easy and there are times when I feel frustrated. But I know where I'm supposed to be and I thank God every day He allowed a dingbat like me to be a part of this miraculous work.

I hope you all have the grandest of weeks.

P.S. If you're reading this P.S., you're also a testimony to me of the miracle of enduring this email to end, and I congratulate you.

Posted by SunnyNell at 2:37 PM