Let me tell you something about September in the Carribean- It's hot. Oh my great lozzy is it hot. It is hotter than two goats in a pepper patch. The chickens here are laying hard-boiled eggs. But it's yet one more thing I'm learning to appreciate about Utah. I never thought I would miss that sick moment when you realize it's warmer in your fridge than it is on your porch, but there you have it. But sun, shade, or tropical storm, the road goes ever on and here we are, preaching the gospel and livin' large. It's a beautiful life. :)

This didn't happen this week, but I figure I oughtta mention that two weeks ago or so, I turned 20. Hoh. Lee. Cow. Where did the time go?? How can I not be a teenager anymore? I swear it was just yesterday that I was being a big bad shameless adolescent rebel and holding girls' hands and sneaking out behind the dumpsters with my friends to drink Mountain Dew and such. In any case, on the evening of August 21, Brockbank and Lopez had already crossed that teenage line way before, and they weren't quite feeling as emotional about it as me. But for heaven's sake, it was the end of my numerical childhood! I figured I had to do SOMETHING in my final hours as a teenager. So, I did up my conservative headband and doorbell ditched the neighbors. 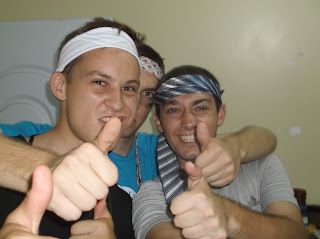 Ideally, I would've also found a girl to awkwardly kiss, but, well, Hell, so I settled for calling Elders Walters and Froude and telling them a story about awkwardly kissing a girl.

This week, Elder Vasquez broke out a new card game called Monopoly Deal. It's fun, fast, and with the amount of hateful thoughts, dirty looks, and death threats that get laid down, the whole repentance section of the nightly conversation with Papá Dios gets a lot longer. 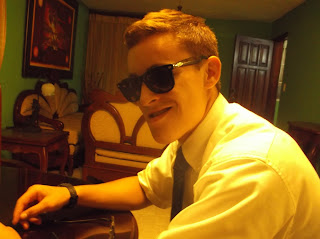 Also, Elder Mejia is colorblind, which gets super funny when he's like, "Um. I think I can win. But. Hey. Elder Lopez. Can you tell me if this card is red, purple, or brown? Brown, right? PURPLE?!! GOSHDANGIT!!!" Yes, yes, this is going to be a thing. 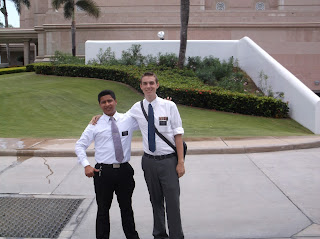 So the other day, it was nighttime and Elder Vasquez and I were feeling rather peckish. To combat this, we stopped at a bakery that was selling exactly two types of bread- fruity turnovers and questionable salami turnovers. Elder Vasquez snagged a couple of the fruity ones right off the bat, but choosing between worms and amoebas isn't quite as straightforward for me. I was contemplating the integrity of our house's plumbing when all of a sudden, the street outside was rocked with an explosion.

Something you've gotta know about Santo Domingo is that a lotta folks steal electricity. It's sort of just a social norm here, but what it means is that to keep costs down, the power companies just kind of shut the power off several times a day for hours at a time. This is accepted and normal, but once in a while, when the power's out for too long, some of the people here do a thing called "huelga." A huelga here is basically a very assertive way of saying, "Turn the lights back on, please," in which people go out and burn tires and throw

molotov cocktails and occasionally get together in groups and talk about where they're going to go to chop things up with their machetes. The power companies are usually nice enough to turn it back on so that no one accidentally gets chopped up with a machete, but every now and again, they keep it out for a day and half or longer just to keep things fun. That particular night, someone had gone the extra mile and found a car to blow up outside of the bakery we were in. Needless to say, the whole old fruit versus old meat debate was quickly settled. The car exploded, I jumped out of my pants, and I left that bakery with neither worms nor amoebas. Of course, I also left that bakery without my pants, and some poor cashier is gonna have to explain how a man-sized hole got punched through the solid cinderblock ceiling. Oops.

Anyway, the other day, I heard about a pretty awesome guy. This guy's got it all. He's tall, dark, cut, and has a jawline that could have been sculpted by Michaelangelo. When he's not signing billion dollar deals to add to his already considerable fortune, he's hitting the town and throwing extravagant parties spending it. In his free time, this guy (who has unbreakable morals to go with his unbreakable abs) goes around taking out criminal organizations, saving puppies, and helping old ladies cross the street. Yes, he's a pretty awesome fellow.

Now. I want you all to take a full minute or so. Stop reading this. Close your eyes. Think of all the people who have touched your life or changed you in some way. One minute.
Waiting. Waiting. Waaaiiittiiinnggg....... Okay, stop.

The first guy, as you may have guessed, is Batman. Batman is a superhero. He's sometimes dark and surly, but he always pulls through in the end and he always chooses the right. He's also not real. And he's also not one of the people you thought about in that minute. You see, the heroes in our lives- the real ones- are not perfect people. Perfect people don't exist. Though we may love their stories and daydream about their powers, the superheroes we read in fiction comic books are just that- fiction. No, the heroes in our lives are the ones who share with us their love, their time, or their effort, and in so doing make a positive difference. Now, heroes like Superman or Thor or Batman already have plenty of attention from everyone. Movies, multimillion dollar enterprises, theme park rides, all that jazz. That may be a lot more glamorous than a couple of paragraphs on an esoterically read no-name Mormon missionary's blog, but from this week until the end of my mission, I'm going to try to do a Hero of the Week in each email. This week is the first, and the more I thought about it, there was only one appropriate way to start this. 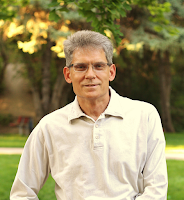 Bruce Wayne, enter Lyle Johnson. Lyle Johnson is my pappy. Now, let's just get the disclaimers out of the way. My dad's Batmobile is a stickshift Chevy. He's a wiry 6' 2" with a majestic shock of hair that is now more salt than pepper. His Wayne Enterprises consists of a second-floor half cubicle in which he writes owner's manuals. My dad's favorite Kurt Vonnegut joke cannot be shared in this email and to my knowledge, he has never dangled a mafia boss by his ankles over a second story balcony, although he has surprised me before. No, my dad is probably not the first guy you think of when you think of a hero. But he is the first guy I think of.

You see, my dad has always been an example to me. He's one of the hardest workers you'll ever meet. He's the kind of maniac who takes a day off and then goes in to work anyway, albeit a little late. He cares about what he does and always tries to do it right the first time. But even for all the effort he put in as a breadwinner, what I admire far more about my dad is just the kind of guy and father he is. He can work miracles with a pen and paper, whether drawing 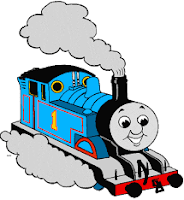 Saturday morning cartoons
(yes, he did that) or doodling
Thomas the Tank Engine
for his kids in sacrament meeting.

When I was eleven years old, I needed a picture of a hydra for my social studies class. Other dads might have just googled something. My dad sat down, and he drew me a stinkin' awesome hydra. I thought that thing was gonna jump off the page and bite my head off. I had nightmares for weeks. It was fantastic.

If someone wanted to go kayaking or take a hike, he was the first in line. He survived being the husband of a pregnant woman FIVE TIMES. !!!!!!!!!!!!. He was the kind of positive who when he slashed his thigh open with an X-Acto knife, he named the gash Nick (as he opened and shut the gash's mouth, "Hi! My name is Nick!") (buh dum TCH!) and put on a funny puppet show until they stitched it shut because, ya know, he'd slashed his leg open. 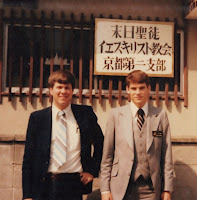 But above all, he always stood firm in his faith. When Lyle Johnson knew something was true, I could always count on him to stand for that truth regardless of who was in the room. That's something I will never forget and will always aspire to. It's what separated the hero from the rest, and so I pray that someday I might be the kind of father to my kids that my dad's been to me.

So hey. Remember the heroes in your life. Fight the good fight. And have a great week.

P.S: I did actually make it out of the bakery with my pants. In case anyone was wondering.

Posted by SunnyNell at 7:42 PM