Hello! Today is a Monday and this transfer is half over. We're drinking too much Coke and eating too many empanadas, but at the end of the day, we're walking up too many stairs and it all evens out. It's a lovely September.

On Tuesday, we went to visit a member named Salome. Yeah, that would be Salome as in Salome, the dancer who wiggled and woggled and bought John the Baptist's head. Unlike that Salome, this Salome is not a twisted floozy (pardon my French) and is actually quite awesome, but her husband, Miguel, has misplaced one or two marbles over the years. He took us on a tour around their house and showed us all of the weeds and random bushes and stuff that were growing in their yard. He then explained to us how birds carry seeds from place to place and for that reason he was now cultivating a huge patch of marijuana. Haha but the funny part was that when he showed it to us, it wasn't even marijuana, it was just some random weed growing out of a crack in his house.

So this week, Elder Vasquez and I contacted this couple. The 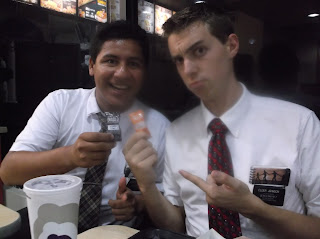 wife was in the kitchen cooking while her husband lounged on the couch, so we sat down and started chewing the fat with him. His wife yelled out, "Y'all want some juice?" Ha! That's like asking me if I know Pancho Villa. Vasquez looked into the kitchen and was like, "Hey, I think that's pear-pineapple juice." Sweet! I love pera-piña! Our lucky day!! The lady brought it out and handed us our glasses. I looked into the cup and klaxons immediately started sounding in my head. I didn't know what that brackish yellow liquid was, but it sure as heck wasn't pera-piña. "What kind of juice is this?" I asked. "Jagua!" she replied brightly. The word pierced me to my very core. Just the name sounds like someone about to puke. In all fairness, I'd never had it before, but I'd heard stories from Elders Barlow and Brockbank. Well flip. The lady was just standing there, smiling at us, and well, I didn't think it would be polite to offend this poor smiling woman, so I took a sip. And I smiled back. I'd never had jagua before. I didn't know what it tasted like. Welp. I do now. It's a delicate flavor, sort of like pineapple juice mixed with gasoline and vomit. Definitely an acquired taste. When the lady came back out five minutes later, I was just starting to regain my will to live and my cup was still full. "Oh, don't you like it?" she inquired worryingly. I smiled painfully at her. "No! It's not that at all!" I protested. "We're just savoring it because it's so good." And to prove it, I downed the rest in one long draught. And there she was again, smiling as the Four Horsemen of the Apocalypse went charging through my intestines. "Oh good!" she gushed, "Here- give me that glass. Don't worry. There's plenty more where that came from!"

At the church later that night, some little kids were playing soccer in the parking lot. One of them passed the ball to Elder Vasquez, who is very good at soccer, and he danced expertly around it as the kids followed him, vainly trying to steal it back and laughing all the while. He passed it to me, and I expertly fell on my face. From me, the ball rolled over to one of the counselors of the bishopric. He just stopped and looked down at the tattered ball, sneering like it was a dead slug. Then he turned around and kicked it over the fence into the street where it got demolished by a passing guagua. Killjoy. 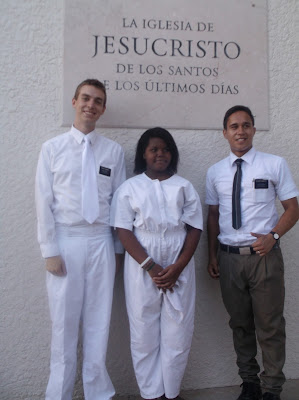 I got to do a baptism on Saturday! It wasn't my baptism. It was a lass from La Isabelita who I visited literally one time and said about five words to, but when the elders there asked her who she wanted to baptize her, she said, "You guys know that big gringo who was here for like a week? Yeah, I want him to baptize me." So I baptized her. It was a beautiful happening. Unfortunately, afterward, I put the bag with my pants down outside and left it and when I came back, someone had stolen it. Alas.

The hero of the week this week is a member here named Aquino. See, the mission has a rule that we can't visit women alone in their homes unless we have with us a member of our own gender. All week, we've been forced to contact for hours every day because we had to drop or push back appointments that we didn't have men for. Some of these appointments have been with super promising investigators, but could only stop by to tell them that. Well. We couldn't stop by. We'd been trying all week to find members to go out with us, but ALL OF THEM were too busy whenever we asked. And then, yesterday, Aquino randomly came up to us in church and was like, "Do you guys have important appointments today? I want to come visiting people with you." And he did. In order to do so, he spent the time in which he would've eaten lunch tending to his little son. His boss called him and offered him an extra work shift (which he needed) and Aquino declined, saying he trusted the Lord would provide. He went out visiting with us for six hours on a bad leg he messed up during the week. As a result of his efforts, we were able to put a baptismal date, find two less-actives who committed to come back to church, give two priesthood blessings, and teach multiple lessons besides. It was a sacrifice with many fruits and we were extremely grateful for it.

It's the weirdest thing. All week, everything was falling through. We could not pay people to be at home when they said they would be. We were forced to go out, knocking on doors sometimes for four or five hours at a time without getting in anywhere. Someone threw a banana peel at me and my freaking pants got stolen. Our week should have sucked. But it didn't. I'm tired. I am happy.