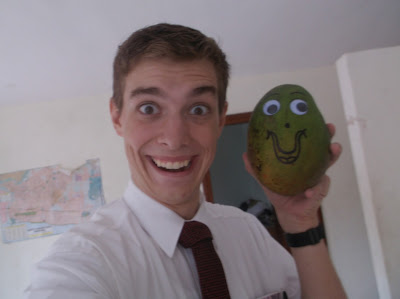 Happy Monday, all ye who somehow still read these nine months later! Yes, yes, it's almost practically official. You could have had a slightly premature baby in the time I've been gone. Or grown 5 inches of beard hair. Or cooked 18144 boxes of Western Family Cheesy Mac Dinner. Or successfully filled out form 153667B at the DMV. It's been a crazy ride up 'til now and it's bordering on just about all downhill from here. Everyone- we're kind of virtually at nine months.

First, in heartwarming news, my journal has been saved! Sure, the pages are a little gluey and ink-smeared, but praise be, it's readable! The only downside is that the receipts and such that I done stuck between the pages got wiped clear. I reckon it could be worse, but now. My posterity. Those curmudgeonly little sweet chucks. How are they gonna be able to take my word for it that I went to Burger King on November 10?

Speaking of which, it struck me this week that there's only one real downside to growing up in a strong Mormon family. If you do something immature or stupid, it will be remembered for time and all eternity. There are eight people in my family, and you already know that SOMEONE wrote it in their journal.

I had to talk in church this week. Considering that I had about five minutes to prepare, it was pretty good. That consideration aside, it was fracking awful. I got up and got out before they started throwing coconuts. Mission problems, I tell you what.

We had a dinner with an investigator family, the Muñozes, this week. They have this thing with always putting music on when we visit. That may sound distracting, but it's actually good. See, there's telling the story of the First Vision, and then there's telling the story of the First Vision with a heavenly choir of angels singing choruses of jubilee and glory in the background. So we showed up for the dinner and they were like, "Hey, let's put some music on," and we were like, Sick! The dad, Moses, went over and searched something on YouTube. I have to interject here- it's usually his wife who does the searching. She is an excellent speller. Moses.... not quite so overburdened with the ability to spell. He writes you a note and you're like, "What IS this? Who would do such a thing to this poor piece of paper?? Ventura! Dang it, Ventura, what did you do with my Urim and Thummim?!?!" The only recognizable word in his search was Mormón. YouTube evidently took that to mean HATE. DESTROY. FORWARD THE COMMUNIST MANIFESTO TO YOUR FRIENDS. Whatever he'd searched had brought up a list of anti-Mormon videos discussing topics that are bad for people who've only finished the first two lessons, including, but not limited to, polygamy, the Mountain Meadows Massacre, and lizard people (that's not a Mormon doctrine, by the by. We do not. DO. NOT. Believe in lizard people. Except for Bossk, but only because he's Bossk). After a fortuitous lollapalooza in which his wife ignited the frying chicken on the stove with an explosion that would've put a flashbang to shame, Ventura took advantage of the resulting chaos and covertly took the route of least evil. We ended up with a clip of the Book of Mormon musical. Total apostasy, sure, but apostasy in not-Spanish and Moses liked the dancing anyway. He is also now under the impression that Neil Patrick Harris is a Mormon. Eh. Take what you can get, I reckon.

A thought. Before the mission, I had this notion that I was going to go on a mission, fix some of the fatal habits I'd since developed, and then I was gonna come back, study, and then I would grab life by the horns and through blood, sweat, and hard work, I'd leave a Mark On the World. This (or at least the idea) is a pretty common thought. People talk all the time about how they want to leave something that humanity will remember them by for all of existence. I myself at one point had a personal motto of "The goal is not to live forever. The goal is to create something that will." However, I have since come to a different understanding.

I am never going to leave a mark on the world. Neither are you. Neither is anyone else. One of the defining characteristics of our mortal existence is that everything here is temporary. Our lives flare up and then pass away. Our mortal bodies decay. The things we built in this life crumble and eventually fade. In time, the very memory that we once walked this earth with shrivel up and disappear. Even with the existence of eternal life, I propose that God does not read Shakespeare nor does He particularly care about whether Conan O'Brien or Jay Leno hosted the Not-At-All-Early Show. Our temporal works are all eventually fated to be worth exactly nothing.

That sounds bleak, but understand- this is not restricting or fatalistic, nor is it a Bad Thing. It is liberating. When we realize that our economic status or level of fame or whatever we had in this life means absolutely nothing, we begin to see more clearly what  does matter.

I submit that the only things that we have in this life that matter are our relationships with people. Our families. Our friends. Our Heavenly Father. See, when we die, we'll have nothing of fame and Ferraris. What we'll have is each other. In a world where everything will eventually fall prey to entropy, souls endure.

So don't get caught up in the strangling web of temporal problems. Don't worry so much about whether your dream is stupid or not. Write a letter. Take the time. Don't participate in petty backbiting and gossip. Help a stranger. Be there for your family. Inspire someone to be better. This is the only chance you'll get to be this kind of a brother, son, or father (I swear that's not sex bias, I'm just writing from a male perspective. Stick the female equivalents in if it bugs you) so make the most of it.  And make your Heavenly Father proud.

Have fun. Do hard things. And stay safe.

Posted by SunnyNell at 6:46 PM