Well I'll be! I woke up one day this week, and hey, whaddya know? It's May. Holy cats. It was a good week! Here in the Outer Rim, we drank us some nonalcoholic wine, took out the trash, and yes- had a baptism. Not bad for seven days.

For the first time since I got here back in late February, amen, hallelujah, saints-be-praised, the house is clean! We'd already gotten it mostly disinfectatated, but there was still a veritable boatload of garbage upon our porch. The garbage truck only comes by once every week or two and you've gotta carry all your trash out to it by hand. Ventura and I were both in the middle of throwing our gladrags on when it finally rolled through on P-Day. It wasn't exactly the GOAT of moments, but there is a law, possibly declared in heaven, that says that when a 300-pound Dominican with a mustache that would make Ron Swanson shed a tear comes by and says you have roughly four seconds to get your trash out, you don't wait until you're in your Sunday best. In retrospect, we must've looked patently ridiculous. Two Mormon missionaries in white shirts, ties, gym shorts, and flip flops sprinting after a rapidly disappearing garbage rig, each carrying his body weight in trash. But goofy getups or no, success was had!

Naturally, the second we got home, the phone rang and Elder Aquino (one of the fellows who do finances and such) about sent me into heart palpitations when he told us we were gonna hafta move to another house with two other elders. You know what's in that house? One tig, one flech, one answer- aw HECK no!!! Luckily, the stable living conditions gods smiled upon us and the moving was indefinitely postponed. I've never been so happy to get two consecutive calls from the office in my life.

Also, this last Wednesday, it was Elder Ventura's birthday. 21 years old. Viejito. Being the totally awesome companion that I am, I decided to throw him a surprise birthday party. Kooky idea, right? WRONG. Try planning a surprise birthday party for someone who you have to be with 24-7 on pain of your eternal soul. It's a rough time. But! Never let it be said that I'm not willing to scratch and cheat. I bought all of the things we'd need in random pieces so that Ventura couldn't connect the dots. I made the Hayashi chicken marinade while he was asleep and paid off a member to bring me a bottle of non-alcoholic wine while he was in the shower. I made sure all the food was prepped and well hidden in the other fridge and I then smuggled our spare key to Elders Tillmond and Carter. They were the key. They cooked the food,

set up the house, cut the lights, and waited. It was awesome! Ventura had no clue. When we got there, they burst into cheers and sang happy birthday. In English. Eh. Ventura got the idea. We had a big dinner, feasting on chicken, rice, fixins, the NA wine, Doritos, ice cream, and whatever other little knick-knacks we could find. We couldn't find ourselves a cake, but who needs a cake when you've got a package of Oreos that taste like cake? We stuck the candles on that, lost three and a half fingers to melting wax, explained how wishing on a birthday cake works, and sang again. There wasn't much in the way of presents. I gave him a tie because well, that's just sorta what missionaries get for their birthdays. Good times! 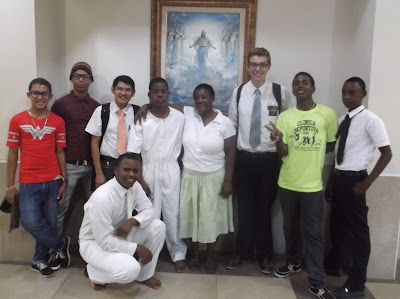 We had us a baptism! Twas a young lad by the name of Darling Patricio. It was my third in Los Solares, and even though as missionaries, we don't have favorites, he was my favorite of the three. Darling's only thirteen, and while we don't like baptizing kids, he's an exception. He's been attending church by himself for a year and a half. He taught the gospel lessons to his sisters. The kid had been preparing to serve a mission for eight months. Even though he was thirteen and unbaptized. We'd honestly just been waiting for permission from the parents. He fought for months and we did too, and then, two Tuesdays ago, he got it. We put one Saturday for the interview and one more to be baptized. The pieces all came together. It was perfect. Will of God, man. The kid's gonna be a beast in the gospel.

Anyway, as you all know, today is a P-Day. But today is a very special P-Day. You see. Today is not only P-Day, it's also May 4. And after the Fourth of July and Talk Like A Pirate Day, May 4 marks my favorite holiday. In commemoration, although it's been over 7 months since I broke out this dialect of Nerd and my Mandalorian is decidedly rusty, it is time. Females and gentlebeings, it's Star Wars Day. I'd crack a bottle of Whyren's Reserve, but the rum smugglers don't come out this far and heaven knows it's against my religion.
This morning, I was sitting in personal study, reading in Ephesians when I found my mind beginning to drift. I was contemplating how in his prime, Shaq probably could've washed down a 72-ounce beef steak with a 48-ounce nerf steak and not known the difference. Although why a man with enough iron in his blood to outfit a Separatist battalion would care what kind of meat he was eating is beyond me. It went from there until pretty soon, my mind was completely immersed in a galaxy far, far away. After about twenty minutes of me staring blankly at the wall with my tongue hanging out, Ventura coughed and said, "Uh. Johnson. Are you alright, man?" I snapped out of it and nodded. "Yeah, dude. Sorry. Just something on my mind." He shrugged. "Maybe you should study whatever's on your mind in the scriptures." Ventura. Ventura! You are a good idea MACHINE! I was on that like Luke Skywalker on a tauntaun. I whipped out the Bible and got to work.

The results? Biblical references to the Sith (Ezekiel 35:6). The prophet Joshua speaking of the land of Endor (Joshua 17:11). We even have prophetic discourse on George Lucas's casting choices when in 2 Timothy 4:11 the apostle Paul writes, "Only Luke is [left]. Take Mark [Hamill], and bring him with thee: for he is profitable to me for the ministry."
This discovery was galaxy-shattering. Life-changing. I'd always felt in my heart that Star Wars was real, but I'd always been afraid to really believe. Now, I had biblical proof. I couldn't just sit on this. I had to be sure. I leapt out of my chair with a vigor that could've disenfranchised a rancor and fairly floated to the phone. We were going straight to the top. I dialed up President Corbitt; he's the closest thing to a Jedi Master I've got. After listening to my explanation, there was a pause. Then, he said, and I quote, "It... is... so." BOOM! That was the chicken, here's a tortilla, and that's a wrap.

It's a trap,
Jedi Johnson
P.S. Many Bothans died to bring you this email

Posted by SunnyNell at 7:07 PM