I love contemplation. In my experience, it's one of the things that colors in the tiny spaces in life (that and crayons). The best contemplation comes when fueled by actual life happenings, in my opinion. Between comings, goings, conflicts, resolves, the fact that my mission is a third over, and the people in this zone still getting debilitating maladies, color abounds. So it goes (‪#‎vonnegut‪#‎dopeoplestillhashtag?).

First, a reminder that there are few simple pleasures in life as delightful as finding fifty pesos after centrifugating your laundry.

So I ran into a Dominican dude (Go figure. Dominicans in this neck of the world) in the internet cafe named Joe who spoke English. I was paying for my computer when he struck up a conversation. It went something like this:
Joe: Are you from the States?
Me: Yeah.
Joe: What part?
Me: Utah. It's in the west. A long way from New York.
Joe: Seriously? I lived in Utah!
Me: What? No way!! No one's lived in Utah!
Joe: I did a study abroad program at a university in a city called Logan. Have you ever heard of it?
Me: Have I ever!! I'm FROM Logan!!!
Joe: Are you kidding me?! Holy crap! This is so crazy! I studied at USU! I'm a True Aggie!
Me: Oh my gosh! I- Okay, I admittedly hate the Aggies on principle, but I'm a TA too!!!!
Joe: WHAAAA-??
Me: WHAAA-??
By the time we finished, I was a drooling puddle of trunkiness, but what an animated chat we had. Like. We were both literally yelling because we were so excited and all of the other patrons were looking at us like. "Um."

Some of the highlights from the week: We joined forces with a Catholic lady old enough to remember the Sack of Rome in order to lovingly annihilate a Mormon who was contentiously confused about some of the finer points of the Fall. I taught Ventura how to play Five Crowns, which resulted in an hour long bloody rooftop deathmatch (we take otherwise gentle card games very seriously in my family) with an insane 6-3 finish with, of course, yours truly taking home the W. I had an intercambio with Elder Tillmond that reminded me that although I've dearly loved my companions, I haven't lived with an English speaker since February. One of the (decidedly luckless) elders in our zone, having just fully recovered from dengue, is now suffering from a crippling infection in the Holland area (which is to say, The Netherlands) and we got to spend a day in his charming company (HAVASUPAI!) while his comp did some baptismal interviews. We also set 8 baptismal dates (!!!) ourselves.

And then one night, this guy came to the door of our house and in English was like, "Hey, I think my cat escaped into your house. Have you seen a cat in there?" Well, that's an interesting question, considering that our house is so solidly built and sealed that you could drop a nuke on it and it would defintely be obliterated, but cats aren't really an issue. "Uh. No?" The guy then proceeded to spend the next twenty minutes flapping his tongue from both ends (that's about as anatomically improbable as it sounds). His entry move was quite smooth with the cat thing and all and he had us going for a while, but we eventually discerned that contrary to all appearances, he was neither interested in the gospel nor in the welfare of his feline charge. The deceiving rogue just wanted to practice Englsh. Hmph! Some pet owner.

I got a haircut today. I should probably study up a bit on my Spanish haircutting terminology, because the guy did this thing where he cut my hair most of the way around, even paring down the sides with a straight razor (a freaking straight razor), and then did literally nothing to the top. I didn't realize it until I got home, though, and now? I look like a llama. A funky llama. And I paid a man a hundred pesos. To make me look like a funky llama.

Afterward, we headed to the chapel of Almirante to play some soccer. Soccer is a sport I haven't really played since third grade, when I played in a coed league and told my sister Maren, who reffed games, that I had a crush on one of the girls. After a season of living in constant fear that Maren would tell her (and being justifiably horrendous at soccer), I swore soccer off forever. In retrospect, that may have been a bit melodramatic, but it certainly seemed like an appropriate reaction at the time. But just as I haven't really played since I was eight, I play soccer like an eight-year-old. Against a bunch of soccer inebriated Central-South Americans. It was. Hm. To use a phrase of my pappy's, I was about as handy as a one-legged man in a butt-kicking contest. It was bad. 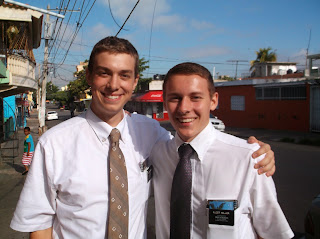 Anyhow, in eight months, I've seen a lot of faces. The mission life is one that in most respects is a very constant experience. But the faces. The faces change. Whether it be your companion, housemates, district, zone, or what have you, people come and go. You get used to it pretty quick. But this week is a little different. You see, this week, my dad goes home. No, no, I'm not talking about the father of my mother's children, who is the dignified-looking gentleman with the tomahawk. That's my pappy. No, I'm talking about my trainer (in the mission, your trainer is your "dad"). Oh aye. In just two days, Elder Miller goes home.

On my first day in the field, we were all gathered in the chapel in Gazcue, trainees seated on the left, trainers on the right. No one knew who their companion would be. I remember looking over, wondering who I'd be put with and praying with a fervency that would've impressed Enos that whoever I got, he'd speak English. And then, President Corbitt said, "Elder Johnson, meet Elder Miller." And so my training started with an awkward hug (only slightly more awkward than the time I hugged Maren's friend Alyssa Hoggan and told her I loved her while on wisdom tooth drugs). We sat down and I asked where he was from. In a rapidfire Sanpete County accent, he said, "I'm-from-Manti-Utah-84642-where-the-cattle-roam." Boy did he speak English! 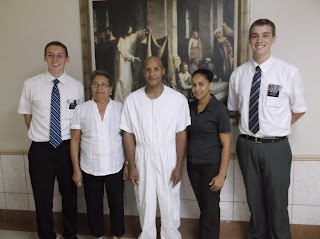 Miller was an impatient guy. He'd call the other elders when they were late and be like, "Hey, where are you?!" and then hang up in the middle of their answer because he got bored of listening. "They got the idea," he'd say (and to be fair, they did). One time, he and an old companion were looking for something in a department store and asked an employee where they could find it. After ten whole seconds of following him, Miller turned around and walked away. "Hey, where are you going??" his comp called. "That guy is clearly going in the wrong direction!" he cried. And oof! Baby hungry. He was always like, "Johnson, look at that kid. He's so cute! How much d'you reckon I'd hafta pay for him?" And every time we'd pass some half-destroyed pile of slag on wheels, he'd nudge me and be like, "Dude. That would be a dope derby car." He also got me saying words like dope.

I've shared a lot of bigger memories in previous emails, but I think I'll remember even more the little moments. Him lighting the kitchen trash on fire. The day we finally made cookies (we set that as a goal in companionship study eleven consecutive weeks before actually doing it). Talking in abysmal British accents. Writing his BYU essays. Him scrapping them and peacing out to Snow College to play basketball. Osorio interrupting his showers. Having our mob run-in. How on the days when I was visibly unhappy, he'd make me a triple decker PB and J and even though I'm not a huge fan, it'd always make me feel better. And of course when on the final day of my training, he passed on to me, his only son, the family tie.

Yes, we had good times. Jokes, crazy people, laughs, spiritual vittlins and the like. We had bad times. Famine, sickness, death in the family, cockroaches, Tusken Raiders. We saw it all. Kind of. Went through it all together. Whether or not we wanted to. And I dunno if I left much of an impression on him, but he sure left an impression on me. So as with all phases of life, that which begins must inevitably end. For now, I stay here and he goes home. Maybe we'll meet again. Maybe we won't. I don't know. But I can hope we will. So until then, even though the man will probably never read this because, well, he never much liked to read, good luck! Send me an invite in three months when you get engaged! Love you bro! 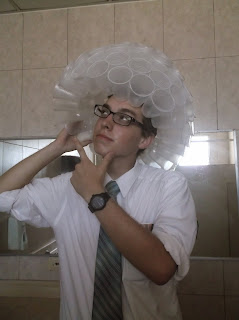 And I love all you other peoples as well.
Love (for the third time),
Elder Dallin Johnson

P.S. We found the cup hat thingie in the bathroom at Darlin's baptism. See, Lady Gaga? I can do it too.

Posted by SunnyNell at 2:56 PM