Before I start this email, I need to define the word transfer for those who don't know. A transfer is a six-week period in the mission. Every six weeks, we have a chance of getting a new companion, a new area, or both. But we always get a new planner.

So transfer orders are in! I'm gonna stay here in Espaillat. My new companion is an old man, and this will be his last transfer, so I will probably be here for not one, but at least two more transfers. If we're being honest, I'm not exactly doing cartwheels over it. But that's more because me doing cartwheels is one of those things that gets videotaped, put on YouTube, receives twenty million views, and shows up on "related videos" lists next to Charlie Bit My Finger and Scarlet Takes a Tumble. Y'all, it's transfer number four :) 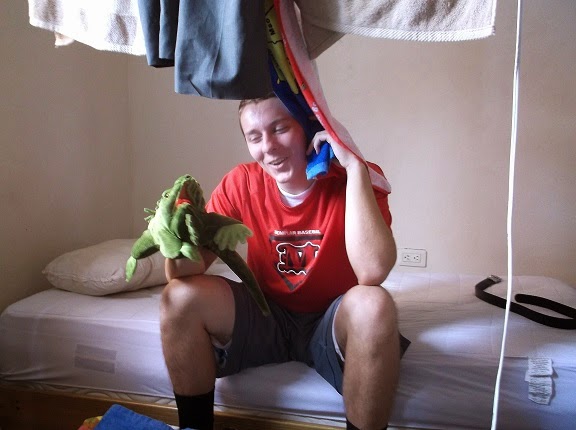 In case anyone's wondering, yes, that IS a picture of Miller with his stuffed Aruba iguana puppet.
Also, he's packing.

Last week, we all got new phones. We were super excited because our old ones were these awful old chunks of plastic that made the phone I had before the mission look like a Galaxy 5S. Also, the new phones had Snake on them, and while we certainly don't play the games on the phones after we're done proselyting at night, Snake is a heckuva lot better than F1 Racer. And then of course the very next morning, they called us and told us they'd distributed the phones wrong and had to take back every one in the mission. Talk about disappointing! It was like going to a kissing booth and getting a handshake.

There's something wrong with all the dogs in this country- They're all missing legs.

Anyhow, training's over! It's been a swell time. Elder Miller and I have had quite the party. I remember one time we were teaching a lesson to a fifteen year old girl, and she said that they had a worship service at school. Miller perked up and said, just like this, to this girl who doesn't know a word of English, "Oh, como 'Hallelujah, praise the Lord Baby Jesus?" And she just nods emphatically, "Oh yeah, yeah, that's how it was." Nyahaha English.

We've also taught a lot of.... interesting people. In a moment that sent me into heart palpitations, we discovered the other day that one of our best investigators is schizophrenic. We were sitting there telling her about tithing when she just started screaming. I sat there, slightly confused, contemplating peeing my pants. I mean, I get it, ten percent sometimes seems like a lot, but holy overreaction. Luckily, she wasn't upset by the doctrine. She was just off her meds and thought that someone was attacking her with a toaster. I wish that was a joke.

Then, we're teaching a guy from the hood. Okay, so technically everyone in this area is from the 'hood, but he was OF the 'hood. He's already told us that yes, he has quite emphatically broken every single commandment, and I mean EVERY SINGLE commandment, but he already served his jail time. He always shows up for church activities with two of his friends. They introduce themselves as "Chancho" and "Papa Chon." I strongly suspect that those are not their real names. A lot of times, I find myself just kind of sitting there, my head tilted bemusedly to the side when I see him walk into the church. But hey, he's always there. Hat, bling, chains, and all.

And of course, we have the crazy people. I don't know what the exact ratio of crazy to normal people here is, but I imagine it's somewhere around the Utahn ratio of men to women. There's one eighty year old guy with a beard who always comes to church. He is almost impossible to understand, but I think he spends a half hour every Sunday trying to get me to explain to him how the word "can" works in English. He also gets up and starts shaking his booty at random moments in the middle of sacrament meeting. It's inappropriate, but so is laughing your head off while the bishop's speaking, so I guess he and I are both at fault. Another crazy guy came up to us in the street one time and started trying to speak to us in English. When it became apparent that we couldn't understand him, he grabbed Miller and before Miller realized what was happening, kissed him and ran away, cackling his head off. Then we were once contacting a lady who seemed perfectly normal until her phone started to ring. She went back to her cupboard and picked up every dish one at a time and held it to her ear, mumbling, "Which one of you is making that sound?"

However, the thing I think I'll remember the most is the difference a little bit of hard work can make. When we got here, we were taking the area over from two elders who hardly ever left the house. They left us two names which we ended up dropping within the first week.

The area was dead.

But now? We've had a baptism. Two more investigators have baptismal dates, and we have a solid body of over a dozen firm investigators and a plethora of others that have the potential to progress. We're bringing gospel truths to the ears of those who don't have them. We're literally changing lives out here. The elders that were in our area before us also sacrificed two years of school, dating, and all that jazz to come out. They all payed the same as us. The only difference between us and them? We went out and did what we came to do. 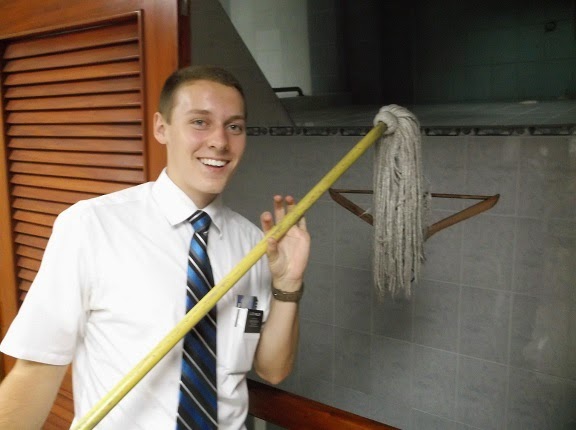 We forgot to pull the plug out of the font before changing after Wellington's baptism.
We were fresh out of font plug pullers, so you best believe we tied a coat hanger to a mop.

It's not really possible to describe what a mission is like to someone who hasn't served one. I know that because I've heard hundreds of stories, read books, seen movies, and not one single one really made sense until I came out and experienced it for myself. And now I know. A mission sucks so good. It's a bizarre experience. Your world changes, sometimes daily. It's confusing. It's frustrating. You get angry. You get sad. You get depressed. You miss things you never thought you'd miss and don't miss things you thought you would. Change and readjustment are a way of life.

But I'm happy. Why on this green earth am I happy? By all reasonable accounts, I shouldn't be. Not at all. Maybe I'm going crazy.
Maybe I already have. But I don't care. Because what I'm doing matters.

And that's all that matters to me.