Hello family, friends, and random fourteen people from Russia who saw my blog this week! It's been a pretty good week in Consuelo. The sun is shining, the horses are clopping, and, well, I just love the word clop. Haha that's one of those verbs that's purely an English thing. There is no Spanish "to clop" and it's great. But I digress! Onward to the week!

So this week, we've been sick. Both Elder Leiter and I got some sort of stomach thing that's either the Christmas flu or the shady chicken some clueless gringo thought he had fully cooked. I mean, blood doesn't have bacteria in it, right? Haha yeah, if that meat were any fresher, we'd have been picking feathers out of our teeth and our neighbors woulda been very upset. Either way, we both had quite the intestinal issue that was mostly okay except we had to go to the bathroom every, oh, twenty-three seconds. Okay, so it was like twenty minutes, but it was bad. I actually handled it pretty well myself, but Elder Leiter. Well. During companionship study one morning. He. Ah. Welp. There's no two ways to say it. He messed his pants. Hahaha his face was so funny. I'll be honest. I laughed at him that morning. I laughed at him during planning. I'm laughing at him now. But luckily, he's good-natured and he's laughing too!

Despite any health issues though, he's still quite helpful! On Wednesday night, we decided to make brownies for district meeting. It was going very well until the time came to actually cook them. The degrees on the oven are in Celsius, you see. I was on the phone with Hermana Pérez and Elder Leiter came up to me and was like, "Hey, how much is 375 Fahrenheit degrees in Celsius?" Now, our phone has a converter, but, well, I was on the phone with Hermana Pérez and I was not about to wait two minutes to do the conversion, so I was like, "I dunno. It's five ninths, so..... I reckon it's like 250 or something?" Well, in case anyone was wondering, I am not a mathetician. They cooked at 250 degrees Celsius for thirty five minutes. When we pulled them out, the flavor only hinted at pencil lead, but the consistency was somewhere between pumice and beef jerky. Yeah. 250 degress Celsius is about 490 Fahrenheit. Oops.

Anyhow, this Friday night, Elder Leiter and I were out doing our proselyting like good missionaries. We were going to our investigators' houses like we were supposed to. We'd done everything right that day. And all of our appointments fell through. Every single one. We tried contacting, but before long, it became apparent that we were caught in this netherworld of trying to contact in the middle of alcohol central on a Friday night. Not a good environment. Everyone who came to the door was either drunk, uninterested, or a girl in a towel. Needless to say, after about two hours of this, we were getting frustrated. We meandered purposelessly for a few minutes until finally, Elder Leiter just plopped down next to a tree and was like, "Elder Johnson, I need to repent. My attitude sucks. It's not supposed to suck. But this sucks." And me in my nearly fifteen month wisdom was like, "Well. Yes. This does suck. Scoot over." And I sat down. We sat quietly for a little while and then Elder Leiter said, "Elder Johnson, I think we need to pray." And I was like. Well. Can't really argue with a prayer. So we did. Elder Leiter bowed his head and said, "Heavenly Father, we're really frustrated. We desire only to serve thee. Please lead us to thy children who are prepared to receive us." And then we both opened our eyes and looked up.

Right in front of us was an orange two story duplex. I could not explain why, but my eyes were pasted to the door on the second floor. Before I could say anything, Elder Leiter eyed it warily and asked, "Elder Johnson, is it weird to go up to the second floor unannounced at 8:30 at night?" and I responded, "Yes. It's super weird. But I mean. What are they gonna do? Reject us?"

So we went up and shouted in a friendly Saludos! (In case no one else noticed, I'm fluent in Spanish. That's so weird to think about. Sorry, I was just reminded that I ring doorbells by shouting "Saludos" at peoples's doors. Back to the story now.) We immediately heard a woman's voice through the door (spoiler alert: her name is Sugey- "Soo-HAY")and the following conversation ensued (it was all shouting, hence the exclamation marks):

Me: SALUDOS!
Sugey: Who's there?!?
Me: The missionaries!
Sugey: Missionaries? What consarn missionaries?!
Me: The Mormons!
Sugey: *pauses* You know this is a dangerous time of year and I can't let just anyone into my house! What do you want?
Me: *shrugs* We're here with an incredibly important message that could bring you eternal happiness!
Sugey: *pauses again* That sounds very important!
Me: Amen! D'you reckon you could spare five minutes for God to change your life really quick?
Sugey: Come to the window so I can see your faces!
*window cracks open*
Sugey: Dang, son. You're white.
Me: No kidding.
Sugey: Who's that kid hiding behind you?
Me: My sidekick. So can we talk now?
Sugey: Yeah, come to the door. 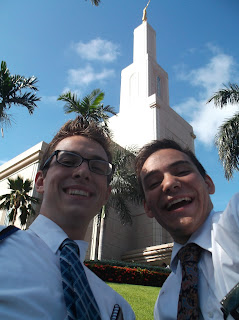 We started to talk with her about the gospel, and to be honest, those ten minutes were some of the most beautiful of my entire mission. Sugey is the elect of God. She asked all the right questions. She happens to be the cousin of the branch president's wife. And just as we finished teaching that God was our loving Heavenly Father, she stopped us and asked, "Why on earth did you decide to jump a gate and knock on the door of my second story house at 8:30 on a Friday night?" And we answered, "Well. Because we were lost. And so we said a prayer. And God sent us here."

Sugey's jaw dropped. And then she told us that she had also said a prayer that day. She'd prayed and told God that she felt empty inside and just wanted to feel His love again. And the second she said amen, two Mormon missionaries knocked on her door and told her that God's greatest wish was for her to receive eternal happiness. It was a miracle from all sides. We descended the stairs afterward, sat right back down by that tree, and we said a prayer of humbled thanks.

Oh, and while we were there, a less-active member happened by her house, saw us, asked for an appointment to meet with us, and gave us a referral. And when we got home, we decided to stop at the colmado to buy some cheese to celebrate, and in front of the colmado, we met another less active who asked to meet with us. Yup. Yo testifico. (I testify.)

God loves His children. He hears our prayers. And He answers them.

Have a grand week,
Dallin

P.S. We went to the temple this week as a mission.

Posted by SunnyNell at 2:47 PM