Transfer calls are in! I'm peacing out of the capital and it's off to the campo! I'm going to a place called Consuelo in the zone San Pedro. After the Plots of Dirt (Los Solares) and the Dudes with Hot Bods (Los Mameyes), it's nice to finally go to a place that's called "Comfort." President Corbitt actually called me on Saturday night after conference and said, "Elder Johnson, I'm sending you to San Pedro, and I'd like you to be a district leader. Are you willing to act in that capacity?" And I was like pfft. PFFT! Claro!! Yes, yes, the final deadbeat of my group has an assignment! But then he just sort of mentioned in an offhand way, "Oh, and Elder Johnson, your district consists of you, your companion.... and six sisters. Have a nice transfer." *click* . . . Six si- Six sist- Si- P-P-Pres- Uh. Uh. Uh. NNNOOOOOOOOOFLBTHBTHBTHX!!!!!!!!

It's not the sisters. They're nice people, really. It's just. Sisters are like lepers. They're genuinely good people and they haven't done anything wrong, but you just sort of smile furtively at them and hurry past, making sure to never EVER touch, because there's that voice inside telling you that you don't know what you're gonna catch, but you're unquestionably gonna walk away with SOMETHING that's gonna make your skin fall off. And so for the most part, you just let them sit in their corner and do...... whatever it is that sisters do. I haven't been in a district with sisters my whole mission and, well, I'm sorta starting to realize why "awkward missionaries" are a thing. Blast.

P.S. The above thing about sisters is NOT misogynistic. It's primal fear.

Naw, I'm excited to go! It's always a weird feeling when you leave an area. Espaillat was like leaving my soulmate, La Isabelita was just a week-long fling, and Los Solares was sort of like a dysfunctional girlfriend who I wrote an offensive breakup poem to but really loved anyway. (A note: Those of you who read the above-mentioned poem on the blog got a Janell Johnson censored version that cut out implied profanity, all direct references to bodily fluids, and the phrase "tight-loined [edited for content]) Los Mameyes...

Los Mameyes taught me a couple of very important lessons. See, let me walk you through a typical day of mine from the last three months. 6:30-10:00- Wake up. Flip off the alarm. Pray. Eat some cornflakes. Put on a shirt and tie. Study. Highlight everything that Paul said that was "totally rad." Stare out the window for a while. Daydream about being a fantastic pianist or a Pokemon master or something. Put on some pants. Walk out the door. 10:00- Go out and offer people the opportunity to live with God in a state of peace and rest for all eternity. Listen to people spend thirty seconds to half an hour explaining why they're just too busy or too hot or too occupied dicing delicious tropical fruits for a waste of time like eternal life. Frantically explain that please please if we have to come back another day that's fine but for the love of everything holy don't trade eternity for a mango. Get an appointment to return. Upon returning, the door is shut and the house is empty. 9:00 pm- Go home. Plan. Write in your journal. Sleep. Rinse. Repeat.

Every. Day. At first, it was easy. I'm doing the Lord's work, right? I know that soon, we'll see the fruits of our labors. Just have to keep working. Well, I kept working. But the fruits never came. And then, little by little, it stopped being a privilege and became a chore. Before long, it became a trial. I handled it well. And then I started to resent it. And then it got personal. Why can no one recognize a good thing clearly presented in front of them? Why are they all so lazy and hard-hearted? And who are all these people anyway? Why are they all so stupid? Why are they always shouting at me and trying to hawk me garbage that I can't use and don't want and do they just have no respect or what? Were their parents even trying when they taught them how to be decent human beings? And my gosh, all of these people are so aimless and in my way and good heck, could you just slow down long enough for me to cross the freaking street? Why is everyone in my way?

If this sounds irrational and stupid to you, well, it is. But odds are, you do it too. See, we all are the own little centers of our respective universes. I have the experiences of Dallin Johnson, and when someone does something, they're not just doing it, they're doing it to ME. We get dragged down in the humdrum routine of life and before long, everything gets personal. And as soon as it gets personal other persons cease to matter. This is why it's so important to have an open, Christlike perspective. You see, these people aren't doing anything out of malice against me. They have pains and struggles that they're trying to overcome too. What if the guy hawking me a fake watch is just trying to bridge the rift between him and his wife because they have to argue about finances every day? Maybe all of the aimless people are people who are desperately hunting for work but can't find it in the wreckage of this economy. Maybe that guy who cut me off is rushing his child sick with dengue to the hospital and contrary to what I seem to think, I am in HIS way. Why do I have to be a judgemental jerk to people who are just living life the best they know how?

These things are all things that we would realize if we just took a second to empathize. To pull ourselves out of our own depressing, self-created shell and see the world with some clarity. Although people do unkind or insensitive things to one another sometimes, and though we may consciously acknowledge it, our actuions prove that we often forget that this is not a battle against one another. We're not here to beat one another. We're here to help one another. And in order to be able to do that, we must follow the greatest example of pure love that ever lived- Jesus Christ. We must live as he lived so that we can love as he loved.

The crappy reality that our entire world must suffer no matter where, when, and under what conditions we live is sometimes difficult to comprehend, but it is important that we comprehend it, because with this comprehension comes a great blessing. That is that our pains and sufferings and trials are not unique. In the case of me and Los Mameyes, there have been literally thousands of missionaries who have suffered through the exact same thing. Regardless of how new and unknown a certain type of trial or pain may appear to us, remember that our scope of existence is very small and there is ALWAYS someone who has had that same thing just as bad, and almost always someone who's had it much, much worse. None of us are special. None of us are unique. And this is good. You see, once we realize that our pain is not some random curse from the heavens and that suffering is actually sort of what defines life and there are a slew of other people who have felt that same thing, it finally hits home that we as people are not so different. And when we understand that, we will never have to suffer alone. There will always be someone who can help us. And when we're done, we can help someone else. Los Mameyes taught me that. I never saw the fruits, but hopefully, the seeds I sowed will bear fruit and make the experience of a future elder that much easier to bear.

So for now, it's off to the campo, and though it feels like I'm leaving very little behind, unsown dirt is and will always be just that- dirt. I didn't see it take root, but I cast some fracking seeds. Can't call it a failure for that. 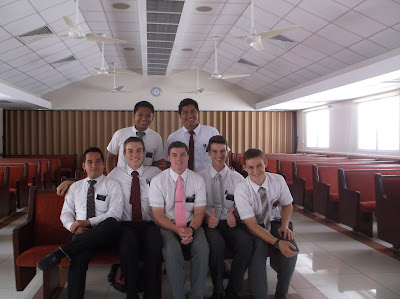