Happy General Conference Easter weekend everbody! I hope you all indulged a little too much on chocolate and enjoyed some of the buena palabra. (the good word) I'm still kicking it strong out here in Amalia #longestintercambioever, where the house ran out of water and we've been bucket showering in our drinking water. Sometimes I feel bad for myself and Elder Froude, but then I remind myself that it's just an opportunity to strengthen my testimony that charity exists in mankind- people still let two stinky gringos into their houses to talk about God, to whom we should pray, and Joseph Smith, to whom we shouldn't. Ladies and gentlemen, it's April. Holy cow someone stop time!

First order of business is a shoutout to a certain hermano de otra madre (brother by another mother) in Peru who's about to hit the field. Remember—the first two weeks are the longest and the relief society arms you got in the MTC'll burn off soon enough. Buena suerte, mi sartén de hogar!!  (good luck, home skillet!!)
So, I finally had my first zone activity of the mission. Mission rules are pretty strict on the subject in my mission, but we finally got the go ahead. We did a three-event district competition which started with a handless muffin eating contest. 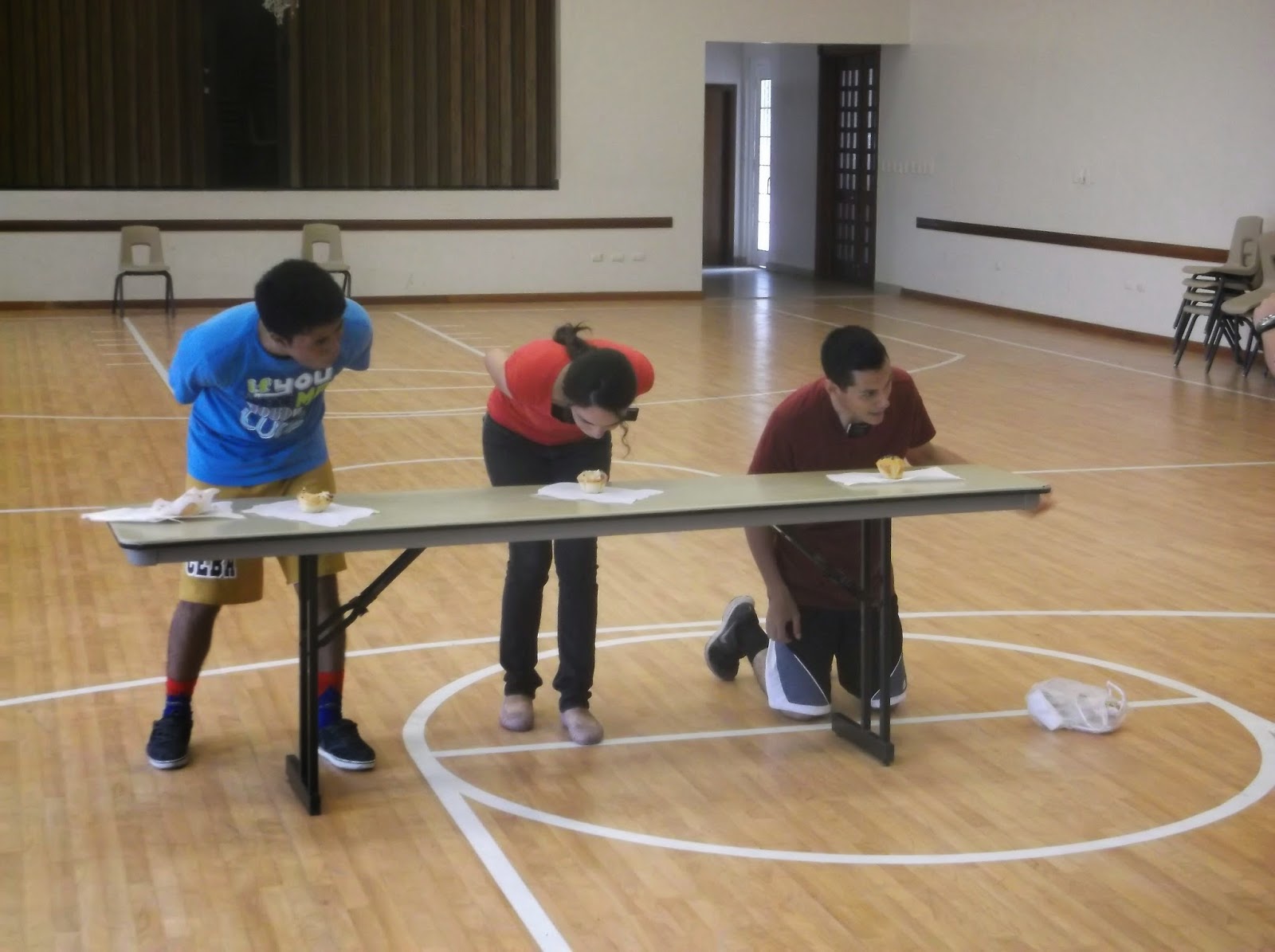 Aside from the general hilarity of watching Elder Garcia smashing his face into the table, he actually got the muffin in his mouth long before the others, but overestimated his ability to swallow the moisture equivalent of the Mojave Desert, and Elder Mecham came out on top. Curse that roguish devil.
Afterward, we did a picture scavenger hunt in which I played Ammon guarding a muffin, a sleeping seminary student (I knew all my days of practice being asleep during seminary would be useful someday... haha just kidding, just kidding), a Jaredite getting a yard of broom handle shoved through his midsection, and the Virgin Mary. Then, we played gospel Guesstures, at which my district actually dominated. In the end, they copped out of declaring us the winners, which would have made us very angry had we actually won.

The mission really does change you. Before the activity started, I was playing the piano and one of the sisters came up and sat down by the piano to listen. There was a time and a season in which a woman coming to listen to my piano playing would've been a bright spot in my day. When I'd have affably smiled and thought to myself, "Oh Johnson, why must you always be so dashing?" But now, when a girl sits down and listens to me, I just wanna stop and be like. "Um. Can I help you?" Haha great lozzy, I'm gonna be a smoldering wreck in seventeen months.

The lowest point of it all was probably after we finished. Elders Froude, Green, and I went with two of the sister missionaries to a tostada shack for lunch. The numbers were offset and obviously we weren't even thinking about anything uncouth, but it's well-known that Froude and I are quite the suave companionship in even the most appropriate of circumstances. Hem. Cough. Right. So yeah, Froude offered one of them a sip of his oat juice, but not to be outdone, I started laughing and spewed half a liter of guava nectar all over creation. And the sisters. Ýeah. Someone please remind me why two such gifted gentlemen are so stinkin' single.


That's all for now. It was a pretty slow week. Hopefully, I'll be back in Los Solares by next P-Day.

Posted by SunnyNell at 2:38 PM