You guys know that feeling you get when you're in school and it's mid-May and there's like two weeks left before summer vacation and you can just smell it in the air? Yeah. After nearly two years. I finally feel that feeling. 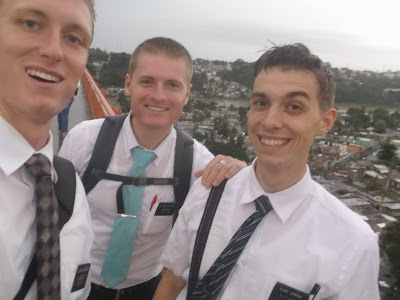 So this week, Elder Koerper had to get some medical tests done. We will not elaborate on the specific issues, but he had to get some bloodwork done. The mission doctor does not have the facilities to do such things, so we went to a Dominican clinic to get it done. It was actually very clean, very modern, and all in all pretty impressive. Until the guy had Elder Koerper's arm there, about to stick the needle in, and Elder Koerper popped a question. "So how long have you been a doctor?" The guy looked up at him through his glasses, and quipped cheerfully, "Oh, we're not doctors." And then he stuck him. Haha. It turned out good.

It's been pretty rainy this last two week, which has sucked a bit, because the streets have been flooded. On Saturday night, we had just bought eggs and bread and were walking through the swampy street on the way to our house. I couldn't see the blacktop through the murky water, so I was just kinda shuffling around, feeling my way along the pavement with my foot when all of a sudden, I took a step with my left foot and by jove, the street was no longer there. Well this was unfortunate. My whole left leg fell into a flippin' manhole and I went down hard. Elder Koerper said afterward that his first instinct was just to yell, "SNIPER! MAN DOWN! SAVE YOURSELVES!!!" Elder Beecher was just happy the eggs were okay. Bums. I too was okay! A bit scraped and a lot shaken up. But okay. 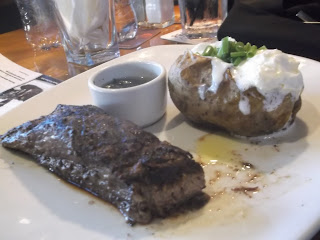 Today's a Tuesday. Time's short, which is why this is ever so slightly sporadic and poorly organized. But yesterday, I went back to Verón. I saw some converts, saw some members, and I went to Outback Steakhouse for the first time in my life. I can honestly say that I have eaten a Chocolate Thunder From Down Under. It was heavenly. I think it was life-changing. 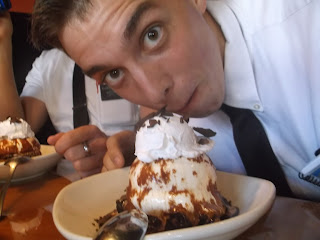 Love you all,
Dallin Johnson

Posted by SunnyNell at 3:09 PM