Happy Duarte Day! I'm calling an official end to the two week email hiatus. Sorry! Everything's just grand here in Consuelo, it's just been fairly uneventful and I decided to use my mental exertions in other areas. So it goes! But! On to the past three weeks!

So we were in a lesson this last week with this investigator we've been teaching and we asked if she had prayed to know if Joseph Smith was a prophet. We'll call her Fulana. Fulana said that she had and that she'd received her answer that he was not in fact a prophet. After she prayed, she had a dream full of demons and in her dream, Satan himself came and told her (I'm paraphrasing here) that Elder Cuadra and I were crotchety old dandies and that we were full of cottonsnuff. Well crap. I was just about to weep and wail and rend my clothes, but luckily, before I could flex and shred my shirt into seven million immodest pieces, Elder Cuadra raised a finger and was like, "Hold on there, lass. When you prayed. Did you pray to God? Or to SATAN???!" Fulana about fell out of her chair. She choked and sort of quietly screeched, "God! I was praying to God!!!" And Elder Cuadra serenely said, "Well, if you prayed to God, then why did Satan answer your prayer?" Her eyes nearly popped out of her skull as she fell all over herself swearing that she'd been praying to God and not praying to the Father of all Evil and so I figured I'd take the moment and was like, "If Satan wants you to believe this is false, shouldn't you take a Book of Mormon break for about a week?" and she was like, "Yes! Yes! I'll read it all the way through!! Don't you folks worry!!" And she has been :) Haha, was it ethically correct? Maybe, maybe not. But dang if it didn't work.

So here in Consuelo, we've got a slight infestation of a thing called "frecas." A freca is a slightly unvirtuous daughter of God who missionaries can only appropriately describe with euphemisms. Around here, I'm quite the hot commodity among the frecas. Back in the states, I'm not the biggest head-turner on the block, but here, my mud-brown eyes, pasty skin, and dignified rice gut are pretty sexy stuff.

Anyway, the other day, Elder Cuadra and I were walking down the street just after sunset. Off the starboard bow, a group of eight or nine frecas in varying stages of undressedness were walking past a nightclub. Suddenly, one of them eyeballed me and gave me a spine-shivering once-over. I pointedly looked away and started walking slightly faster. And then they stepped in front of us, stopping us in our tracks. The freca in front looked me right in the eyes and was like, "Hey, Rubio"- that would be me- "why don't you come crash at my place tonight?" My legs sort of turned to vanilla and I was like, "Uh, duh, gurr, blagh," and Elder Cuadra (who actually speaks English) nudged me and was like, "Don't say a word. Let's just bounce." So we awkwardly bumped our way through them and started walking away. Instantly their voices started complaining, "Awww, Rubio! Don't leave us hanging like that! We're nice girls!" And then, one phrase popped into my head. I didn't know if it was a spiritual prompting, but I figured it couldn't hurt. I turned my head to the side and screamed in English, "What's SHAKIN', bacon??!!?!?!" and Elder Cuadra about ripped himself a hernia from laughing so hard. We both chuckled around the corner. On the way home that night, we saw the exact same group of frecas walking toward us, but this time, when they noticed us, they just all stared at the ground and hurried past. Fist bump to Elder Cuadra. Awkward missionaries never die.


Just a short thought before we finish up here, and it has to do with salami. I really like salami, but it's been a long, long time since I bought a full salami. I buy a little chunk every now and again for some pasta or a sammich, but this week, I decided to buy the whole thing because really, it's more economic. And I was reminded of why I stopped buying full salamis. See, I like it so much that as I was walking past the cupboard, I decided to cut myself off a little slice. And then, the next time, I cut myself off a slightly bigger slice. And then, before I knew it, I measured the wrapper to the remaining meat and discovered that in just three days, I'd eaten a pound and a half of freaking salami. It can't be! I thought to myself. How is it possible? I only took tiny bits! And I was hit by a resounding truth. I ate salami. Because I had salami. Now...

Life is sort of like buying full salamis. There are things that are fun or pleasant, like eating salami or maybe watching netflix or playing video games or reading trashy fiction, but that are also not the best thing for you, like the abovementioned items. Ideally, we'd be able to control ourselves all the time and save the dang salami for when we were actually gonna need it or at least not hurt ourselves with it, but most of us do not have that great of a track record. The message? Be careful with how much of a thing you put in your life. Because if you have salami. Then you'll eat salami.

Have a grand week. Don't be dumb. Have an adventure.

P.S. My companion is a banana. (when he's asleep) 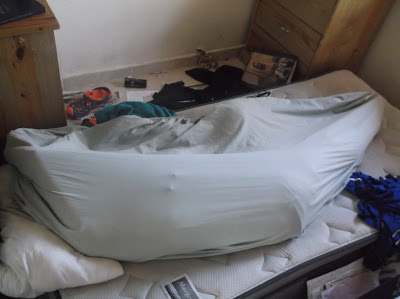 Posted by SunnyNell at 2:40 PM